Sure, spelling may not be their strongest skill. But California surf punks Wavves — helmed by singer-songwriter Nathan Williams — channel the type of scuzzy self-deprecation all good West Coast punk bands should possess.

If songs about getting dumped, getting stoned and harming one’s self are up your alley, Wavves faithfully delivers the goods. The group has been touring since the release of 2012’s ‘Afraid of Heights,’ breaking only to help soundtrack video game massacres by contributing the song “Nine is God” to ‘Grand Theft Auto V’ (by the way, Williams and bassist Stephen Pope also host one of ‘GTA V’’s in-game radio stations).

Thursday, Sept. 11, the four-piece returned to Cleveland for the first time since April 2012 (this writer’s broken glasses and busted lip from that show at the Grog Shop can attest to how good of a performance it was).

Opening the bill was Cleveland’s own Herzog. These self-described practitioners of “subtlety-free rock” balance muscular riffs with pop sugar, stylistically resembling power pop giants such as Weezer and Teenage Fanclub. The release of their third and latest LP ‘Boys’ last May — via respected Cleveland-based indie label Exit Stencil Recordings — saw the band fully coming into their own sound, one which translates excellently to a live setting. Their set was peppered with highlights from ‘Boys’ such as “Satan is Real” and “Mad Men.” The interplay between vocalist/guitarist’s Nick Tolar (who bears a striking resemblance to Pixies’ Black Francis) and Dave McHenry was a sight to behold — a tightly focused-yet-occasionally raucous display of fuzzy hooks and disaffected lyricism. As far as local bands are concerned, Herzog stands above the rest.

Wavves set was, primarily, a judicious split between songs from 2010’s ‘King of the Beach’ and ‘Afraid of Heights,’ with a few new tracks interspersed throughout. Kicking off the night were a score of tracks from the latter of these two albums: “Paranoid,” “Sail to the Sun” and “Afraid of Heights.” Williams, sporting a sleeveless Tweety Bird shirt (because why not?), split his evening between playing rollicking, down-strummed surf punk numbers and reverb-drenched toss-offs, equitable to spending a lazy summer day baked in the scorching sun. “Demon to Lean On,” arguably the band’s most well-known and most nuanced song, was followed shortly thereafter by two of ‘King of the Beach’s’ more dissonant tracks: “Idiot”and “Super Soaker.”

As for the new tracks played — “My Head Hurts,” “Wait,” “Way Too Much” and “Heavy Metal Detox” — each amalgamated unceremoniously into the band’s set. This isn’t meant to be a disparaging remark, but Williams has a certain aesthetic that is put to use on nearly every Wavves track. While each song had its own nuances, taken as a whole they sounded like pretty much every other Wavves song.

This proved of little concern for a notably youthful, PBR-soaked crowd at the Beachland, many adorned in trendy ‘90s t-shirts and attire (sh*t, I was wearing a ‘Blue Album’ shirt, who am I to talk?). The show’s energy climaxed at its conclusion as Williams and company ripped through “King of the Beach” and “Beat Me Up” before ending the night with, in this reviewer’s opinion, their two best tracks: “Green Eyes” and “Post Acid.”

Overall, while their Beachland performance may not have eclipsed their show at their 2012 Grog Shop gig, the energy was constant throughout, making for a reliably satisfying set from Wavves. Williams says it himself on “King of the Beach”: “You’re never gonna stop me.” I hope we don’t. 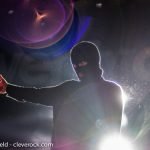 What Does An Inch Matter?