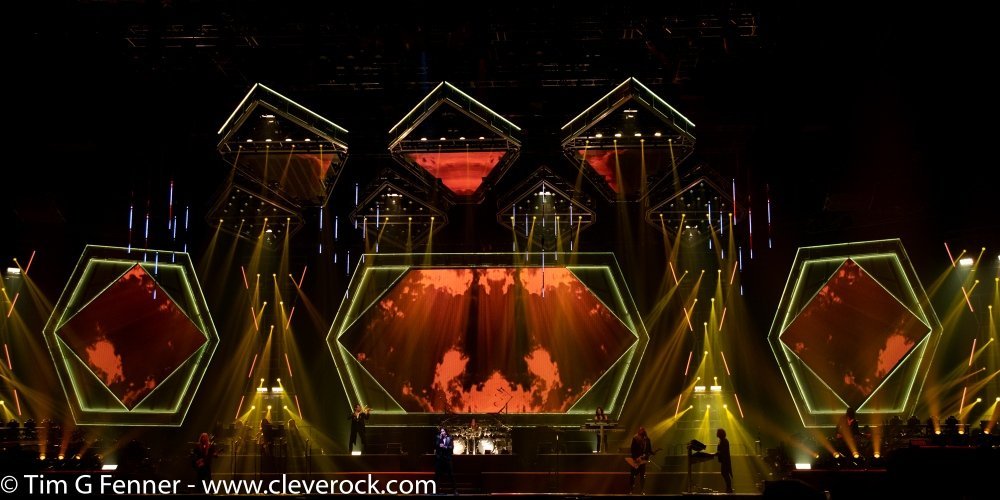 Wikipedia describes this band as a rock band…hardly and yes…their genres range from opera, hard rock, neoclassical and heavy metal and every other kind of metal. The band’s founder the late Paul O’Neill was the composer and lyrist for the band. The rock opera, Trilogy, called Christmas Eve and Other Stories was their debut album released in 1996.

The 2019 Winter Tour is going back to the beginning of their holiday tours, by revisiting Christmas Story a tale of an angel’s journey to Earth to find out if there are any good people left and of course it starts on Christmas Eve,

The high-tech multi-colored laser lights danced to the music with precision and purpose. A variety of lights singularly along side 7 rhombus shaped light panels slowly glided down, twisting and turning from the ceiling in a series of ebb and flow. The 3 LED video screens on stage (with complementary screens built into the ceiling light panels and below the stage surface) depicted images of scenes that at times supported the theme or just presented a random mix of colors, and images. The pyro-technics were a bit insane with fire bolts shooting out from the middle and across the stage, shooting up and out while crisscrossing. If you sat near the stage you could feel the intense heat and the blinding light. It’s important that the performers knew exactly where to stand at all times as to not get barbecued.

The stage was setup with a mini-orchestra (local talent was hired for the show) and a choir. There were 5 female and 4 male back-up singers that moved in unison to synchronized choreography. A few of the singers would perform solos throughout the show. The touring musicians were virtuoso violinist, Roddy Chung, bassist, Tony Dickenson, lead guitar Joel Hoeksta, their long running drummer, Jeff Plate, keyboardist, Mee-Eun Kim, and musical director/keyboard Derek Wieland and guitarist Chris Caffery.

TSO knows how to appeal to heavy metal music lovers as well as those who want to jump start their Christmas holiday. It’s not a traditional Christmas holiday concert and you may not be humming Christmas tunes leaving the show; but the elements of Christmas are there and the laser light show will surpass any Christmas lights you’ve seen in the past.

The concert opened with an introductory choral expression of “Who I Am” prior to the beginning of the concert. The story is narrated by the infamous Brian Hicks. The song “An Angel Came Down” was wonderfully sung by Dustin Brayley. The concert began in the Old City Bar with Zachary Stevens dressed as an old man and he performed a melodic and moving vocal rendition.

The band continued with the Christmas portion of the concert with “O’ Come All Ye Faithful /Oh Holy Night“. The stage LED screens turned to an image of a church with colorfully stained glass windows and the LED was trimmed to reflected purple, blue and pink. Erica Jerry did a powerful gospel version of “Prince of Peace.”  She received several cheers from the crowd while she belted out the chorus and beautifully demonstrated her range and vocal control.

The “First Snow” did not disappoint with white laser lights turning to purple and then a bombast of all of their laser capability with a multitude of colors and chorographed to the music ending with fog and snow coming down from the ceiling. During “A Mad Russians Christmas” was high-energy metal rock with a lot of hair flipping, and backbreaking, pre-choreographed poses while they moved systematically across the stage.

They played 13 more songs including the rock opera “Promises to Keep” sung beautifully by Kayla Reeves, “Good King Joy”, “Ornament” a moving blues, gospel version sung by Robin Borneman, “This Christmas Day“, and the “Epilog“.  The second half included “The Storm/The Mountain” depicting an electrical storm that included two Tesla ball in the back of the auditorium shooting out lightening between the two. They also played “Handful of Rain” which is on their Savatage cover. The song “Wizards of Winter” a progressive rock instrumental featured all the musicians, including dueling keyboards and synchronized lights interchanging wit fire bolts. The ended the evening with their well known and powerful Christmas Eve (Sarajevo 12/24) which had a dramatic close to a wonderful evening ending with a sea of single candles dropping from the ceiling and to remind us that we should be kind to each other.

It should be noted that TSO donates a dollar or more from every ticket to a charity that assists children. They have donated over 10 million to national and local charities in the city where they perform. This Youngstown performance went to Akron Children’s Hospital Mahoning Valley and Sight for All United.