On Tuesday night (07.01.14), fans sporting mostly black and white attire anxiously filed into the House of Blues to see indie rock band The Neighbourhood. As the Newbury Park, California natives took the stage (also clad in black and white), fans cheered loudly as the daunting first notes of “Female Robbery” filled the air.

Formed in 2011, the band managed to develop a unique yet captivating sound in a short amount of time that was truly showcased on their 2013 release, ‘I Love You.’ The Billboard Chart topping hit from that album, “Sweater Weather” was definitely a fan favorite of the night as well as “Let It Go” and “W.D.Y.W.F.M.?”

The band also pleased their EP loving fans by performing “Wires,” a haunting number from their 2012 EP, ‘I’m Sorry…’ as well as their more hip-hop sounding tune about their beloved home state, titled “West Coast” from their 2013 EP ‘The Love Collection.’

Although the band’s album was released in 2013, they did have a handful of new songs to perform, including “Honest,” which was released as part of The Amazing Spiderman 2 soundtrack, a beautiful and empowering song which fans passionately sang along to.

The Neighbourhood also provided a sneak peek of songs that will presumably be on their forthcoming album, ‘Black and White,’ tentatively scheduled to be released later this year. The new songs did not stray too far from the sound of those on ‘I Love You,’ but the lyrics that frontman Jesse Rutherford sang still carried the same depth and meaning that fans love about the band.
[divider]
–Photos: The Neighbourhood (HOB Cleveland; 07.01.14)–
–Photos: White Arrows (HOB Cleveland; 07.01.14)–
[divider]

Due to a prolonged set by the support act Travi$ Scott, The Neighbourhood was forced to play straight through their set instead of doing the usual routine of exiting the stage, only to return for an encore. Scott put on a performance quite different than the other bands, showcasing his intense rapping and crazy stunts. At one point, Travis$ climbed onto the balcony of the upper level seating of the House of Blues. Fellow opener White Arrows sounded much more similar to The Neighbourhood with their captivating psychedelic rock music.

White Arrows played a number of songs from their first full length album, ‘Dry Land is Not a Myth,’ released in 2012. “Get Gone” and “I Can Go” were both fun, high energy songs for the crowd to jump and dance to. Similar to The Neighbourhood, White Arrows have made great strides in a few short years. The quartet from Los Angeles has already developed a unique rock sound that made their performance memorable. The rules of life dictate that there is no second chance to make a first impression. That’s a not a problem for White Arrows, evidenced by numerous fans lining up to snap photos with the guys and walking out the door with the band’s album.

After the show, a group of dedicated fans waited behind the venue to chat with Rutherford and guitar player Zach Abels, both of whom obliged requests to sign autographs and pose for pictures. In an industry flooded with egomaniacs and divas, it is refreshing to see a couple of average, genuine dudes, show they care about their paying customers. 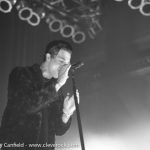