Brooklyn’s The Hold Steady have always prided themselves on guitar-driven, lyrically dense storytelling, ripe with seedy, drug and alcohol-addled characters seeking to carve out their place in frontman Craig Finn’s updated vision of Americana.

Musically, the group falls somewhere between early, hyper-alliterative Bruce Springsteen (due primarily to Finn’s hundred mph lyrical delivery) and the boozy guitar theatrics of The Replacements (who, like Finn, hailed from Minneapolis).

Though the band has been dormant since the release of their critically praised 2010 LP ‘Heaven is Whenever,’ they recently announced plans for their sixth studio effort, titled ‘Teeth Dreams,’ to be released March  via Washington Square (a new label imprint of Razor & Tie).

On the heels of this announcement, “America’s # 1 bar band” brought their top-notch, beer-soaked catalogue to Beachland Ballroom on Saturday, Feb. 1 – and they did not disappoint.

Kicking things off with throwback track “The Swish,” off their debut album ‘Almost Killed Me,’ the band set the tone for the entire night. The dual assault of guitarists Tad Kubler and Steve Selvidge provided the ideal, classic rock-inspired sonic backdrop for Finn’s drunken-drawl afflicted lyrical delivery.

“I Hope This This Whole Thing Didn’t Frightened You” – the group’s first taste of new music from the forthcoming ‘Teeth Dreams’ – followed in suit. But primarily, The Hold Steady devoted most of the night to giving their sold-out, highly intoxicated collection of raucous fans the band’s most popular numbers.

The middle portion of the setlist included favorites such as “Girls Like Status,” “Sequestered in Memphis” and “South Town Girls.” Throughout the set’s entirety, Finn bounced around the stage with the youthfully exuberant energy of a frontman half his ripe 41 years of age (perhaps the Corona Extras he was nursing over the course of the night had something to do with it). He engaged the crowd with every available opportunity, buoying their already lively demeanor.

Closing out the pre-encore portion of their set with ‘Separation Sunday’s’ “Your Little Hoodrat Friend” and ‘Stay Positive’s’ “Slapped Actress,” the band’s departure from the stage was short lived, as they returned with a six-song encore.

The encore itself was laden with material from the band’s 2006 LP ‘Boys and Girls in America’ – widely considered The Hold Steady’s crowning musical achievement. “Massive Nights” led off, and a beer-buzzed Finn introduced “Chips Ahoy” by explaining, “Most of our songs are about boys and girls. This song is about a boy, a girl and a horse.”

“Stuck Between Stations” rightfully elicited a crowd sing-along (and a makeshift Irish jig by the blitzed compatriot to my left). Closing the night was the admirably sentimental “Stay Positive.”

Forgive the varied allusions to drunken behavior, but, quite frankly, The Hold Steady have always specialized in the perfect brand of Midwestern guitar rock perfect for an evening of sloshed shenanigans at your local watering hole.

That’s the point of their music – engaging in celebratory, liquefied antics is the explicit purpose of good bar-band rock ‘n’ roll. And The Hold Steady are the absolute best at providing this. So throw back another Budweiser and dance, you’re in good company. 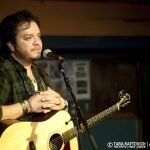