The floor shook as The Faint had everyone dancing at the Cleveland House of Blues this Thursday night (05.22.14). Beforehand, supporting act Reptar, from Athens, Georgia, had livened up the crowd with their eccentric indie tunes. Most entertaining to watch was keyboardist William Kennedy’s slinky dance moves.

However, the crowd almost doubled as The Faint, originally from Omaha, Nebraska, prepared to go on. The band is on tour in support of their April, 2014 release, ‘Doom Abuse’ on new label SQE.

The Faint came on stage accompanied with undeniably blinding lights that alternated colors and directions throughout the entirety of their 22 song set. The quartet kicked off their show with “Animal Needs” from their latest release. The band’s lengthy set allowed them the freedom to find a nice balance of old and new songs, spanning their eight album discography.

Fan favorites including  “Worked Up So Sexual” (from 1999’s ‘Blank-Wave Arcade’), “Desperate Guys” (from 2004’s ‘Wet From Birth’), and “Agenda Suicide” (from 2001’s ‘Danse Macabre’) were all worked into the setlist, with a solid dose of newer material weaved in as well.

After roughly 20 years of performing with The Faint, it would be easy for frontman Todd Fink to phone it in and just run through the motions, making his enthusiastic and energetic performance all the more refreshing.

The three song encore closed with fan favorite “Glass Danse,” concluding an impressive show. As long as The Faint continue to approach putting out new music with such a unique style and translate it well to a live setting, fans will continue to fill venues for their shows.
[divider]
The Faint official site | The Faint on Facebook | Follow @thefaint on Twitter 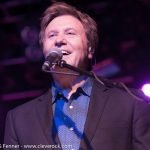