Smith & Myers at the drive-in

Pre-COVID, this writer was accustomed to attending eight concerts in a slow month. Now, nearly eight months to the date have passed since I attended a single show! The horrid streak ended on this beautiful (albeit chilly), starry night in Butler, PA at the Starlight Drive-in.

1/2 of multi-platinum rockers Shinedown, frontman Brent Smith and guitarist Zach Myers, collectively operating under the appropriate moniker Smith & Myers, are being equally brave and innovative as a select few peers that can almost be counted on one’s fingers.

Their solution to venues across the country being shuttered? Drive-in movie theaters. On the surface, the idea seems odd. Perhaps inspired by the incredibly awful idea of charging $100+ per carload to watch a pre-recorded video of a concert (talking to you, Metallica and Garth Brooks!), this is far different. Smith & Myers were at the drive-in in the flesh with a tall stage and booming sound system to boot.

For the most part, safety precautions were followed. Some vehicles were parked too close to each other, minimizing social distancing, but all-in-all, fans did their best to respect guidelines to ensure these events can continue in the future. Who knows when things will return to the old “normal” — if ever? For now, this IS “normal.”

The show itself was a unique experience. Shinedown is one of the most versatile mainstream acts in the biz, with the ability to mix heavy songs and showcase a much more mellow side with the flip of a switch.

Without drummer Barry Kerch and bassist Eric Bass, Smith & Myers both had to bring their A-game. No problem there! The energy they brought and the ability to pull off heavier songs with just Smith’s vocals and Myers’ acoustic guitar was most impressive.

On the road ahead of their new records, ‘Smith & Myers Volume 1′ (10.09.20; Atlantic Records) and ‘Smith & Myers Volume 2’ (10,23.20; Atlantic Records), the duo debuted some new tunes off of the record including “Bad At Love,” “Panic!” and “Not Mad Enough.” All were well received by the patrons, 10 rows deep in parked cars, and showcased a detour from Shinedown’s traditional sound, save of course the powerful and distinct vocals from Smith.

The gents kicked it up a notch with the harder-hitting “Bully” before breaking out into a cover of one of this writer’s all-time favorite tunes, “Runaway Train” (Soul Asylum).

The guys bantered back and forth between songs, with stories of their friendship, forgotten underwear, stories behind the songs, and messages of positivity; shining a light in these dark times.

Myers got his shot at vocals during a solo set that included Prince’s “Raspberry Beret” and Bruce Springsteen’s “Dancing In the Dark.”

The set ended without an encore, closing with Neil Young’s class “Keep on Rockin’ In the Free World.”

Prior to Smith & Myers, former Flyleaf frontwoman Lacey Sturm performed an energetic set. Like Smith, this gal has some killer pipes. She didn’t preach per se but instead delivered a positive message of hope, stemming from her Christian views. It’s refreshing to see the bright angle instead of the hatefulness spewed by certain government figures, committing blatant blasphemy. No matter one’s religion, values, or creed, Sturm’s message could resonate with anyone.

As for the drive-in concept? MEH. This writer is not sold on it. But for now, it’s the smart way; the safe way to do things. At this juncture, I’ll take live music any way I can get it. Hats off to Smith & Myers for taking the initiative and pioneering a way to deliver live music to an audience that is beyond starved for a live show. 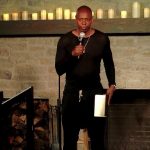