Silversun Pickups are one of the most unique sounding bands around today. No, really. They are. Promise. Fire up YouTube, Spotify or other favorite streaming service and give them a listen. (Chances are, you have heard them already.) Frontman Brian Aubert has a voice that is as unique as (although completely different from) Raine Maida of 90s alt-rock outfit Our Lady Peace. Accompanied by the tremendous talent in bassist / backing vocalist Nikki Monninger (who has quite the unique voice of her own), keyboard player Joe Lester, and rounded out by drummer Chris Guanlao, SSPU released their fourth studio album, ‘Better Nature’ in the fall of 2015, marking their fourth excellent album in four attempts. The album features the singles “Nightlight” and “Circadian Rhythm (Last Dance),” which have combined for more than 15 million plays across mainstream streaming services.

Monninger checked in with CleveRock.com ahead of the band’s upcoming July 8 show in Cleveland (supporting Third Eye Blind) [Complete show and ticket details: RIGHT HERE!] to discuss the tour as well as her juggling skills to devote her attention to both road life and mothering twin daughters.

“The tour is going great! It’s easy for us. We go on from 7:30 to 8:30 and that way we get really nice, condensed sets. And then the Third Eye Blind guys come on and do a great show,” Monninger said. “In general, we love playing long sets, but the nice thing is that we’ve been able to change things out and switch things up a little more with the shorter ones. It’s just like playing a festival. We usually play an hour or so.”

Tour headliner Third Eye Blind is one of several bands celebrating the anniversary of a landmark album (in their case, 1997’s self-titled debut) – Scott Stapp of Creed, U2 and Everclear are a sample of other bands doing the same thing this summer. Would Silversun Pickups ever consider joining in on this trend, specifically, for their 2006 breakthrough album, ‘Carnavas’ ?

“We would love to! We meant to do something in 2016 and now it’s already gone because it would have been nice to do a 10-year Carnavas tour,” Nikki said. “So hopefully by the time 20 years rolls around we have it together enough to do something for that.”

When this interviewer finally saw SSPU for the first time, Monninger was home, about to give birth to twins. Embarrassingly enough, I referred to this tour as “recently.” When in reality:

“It’s been about five years now. The girls are four and a half now. I have a new concept of time now that I have the girls because you can physically see them getting bigger,” she said. “I’m so glad that I was able to take some time off, but I think it gave me an appreciation for the band so when I came back I was happy to be there and by doing both of these things. When I’m on tour I appreciate the girls so much more.”

It must be tough being a marathon-touring rockstar and a mother. Those are probably two of the most time-consuming responsibilities in life. Luckily for Nikki, she tells me she has lots of support back on the homefront.

“It definitely takes a village. I’m so fortunate because I have my husband at home. When he’s working the girls are in school or the grandparents are there to handle everything while I’m gone and while my husband’s at work,” Monninger explains. “They have so much fun. Yesterday they went to Knott’s Berry Farm and they make it really fun for them while I’m away.”

“But really, if it wasn’t for my family and everyone at home, I wouldn’t be able to travel like this. So I’m very grateful that I’m in the situation that I’m there and then it’s just it’s hard for me,” she continued. “It’s harder for me to be away than for them because while I’m away they get to do lots of fun things and be with family.”

Luckily, it is 2017, and the ways to stay in touch while afar are limitless. Nikki has no problem staying in touch with her daughters while on the road.

“I do a lot of face times with face time in the morning and at night and sometimes in between.  I get to just sit back and watch them play or just whatever they are doing,” Monninger explains. “And I got to be good to be a part of their play time and have tea with them or just be a part of what they are doing at home. So it is hard to balance. So far, so far so good, knock on wood. It’s a learning process. And, I’ve learned that kids are very, very resilient. It’s just we’ve made this a part of what we do. It’s a part of what Mom does. Mom has to go away sometimes, but I always tell them I always come back and I try to come back as much as I can during tours. If we have a couple of days off I’ll come home.”

“I think a couple of things have come up we haven’t actually gone into the studio and we want get out until we are done completely with this Better Nature tour,” Monninger revealed. “I think we’re planning a little something later in the fall and those will be the final shows before we go back into the studio. So I think that there will be some more time before we have our next album out. We’ve toured a little bit longer than we usually do but we just had some great opportunities come up. Our plan is to, toward the end of the year after we are done touring to regroup and start going into the studio.”

For anybody who has seen Silversun Pickups perform live, it is easy to tell that their recorded music, while stellar, does not do the members’ full range of talents justice. Perhaps a live album or video is in order?

“Not in the near future. Maybe someday, but it’s not something we’re talking about now but it would be nice to document in an official way what we’re doing and to have that as sort of a time capsule,” Monninger said. “But right now we don’t have anything in the works.” 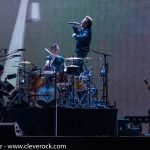 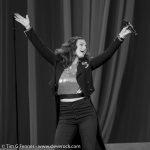