Sometime just after the turn of the millennium, a young Scotty McCreery could be found in his home in Garner, North Carolina, listening to Rascal Flatts albums. After succeeding in a few local singing competitions, Scotty took a quick trip to Milwaukee, where he garnered a coveted golden ticket that sent him to Hollywood as a contestant on American Idol (where he emerged as champion on the show’s tenth season in 2011), which lead to a platinum selling debut album (2011’s ‘Clear as Day’) that began his conversion from reality television star to legitimate force in the country music scene. Now, it’s 2015 and 21 year old Scotty still enjoys listening to Rascal Flatts…from backstage, or side-stage, or wherever he pleases, after he finishes his 40 minute set as their opening act each night.

“I had a lot of their records and jammed out to a lot of their songs. I was telling [Rascal Flatts member] Jay [DeMarcus] the other night at dinner that one of my favorite songs by them was not even a single, it was called ‘Like I Am.’ I definitely grew up listening to their music and it’s more of a testament of how young I am as opposed to them being old,” said Scotty.

Phoning in just hours before a headline show at the Appalachian Fair in Gray, Tennessee, McCreery talked about how his approach differs between a headlining show and his gigs opening for Rascal Flatts:

“On a show like tonight, when it’s me headlining, I’ve got an hour and a half to take fans on a journey, take them on a ride. They’re coming out to my show and hopefully they have my records. We have a little more freedom with our set and can slow it down some. Whereas with Rascal Flatts shows, we only have 40 minutes to go out there and make an impression, so we’re really going balls the walls for 40 minutes without a lot of breaks because we need to connect and make sure the crowd is enjoying themselves. If they came out just for Rascal Flatts, hopefully we gave them a good introduction to Scotty McCreery.”

Scotty also broke down the differences between performing for millions on television versus 20,000 people live.

“I’ve only lived 21 years, but I don’t think like I’ve ever felt a feeling 20,000 plus singing your songs back to you. I’ve never felt anything like it. It’s a different feeling than Idol, because that was a very nervous feeling, whereas live shows for me now are more of an energy thing. With Idol, there were only a few hundred people in the studio but through the camera lens there were anywhere from 10 – 15 million people watching you. You had to bring it on a different scale and bring it more so to the camera than the live audience. You got the rush, but in a different way.”

McCreery’s launchpad to stardom, American Idol is ending its run on television at the end of next season. Naturally, he had thoughts on this as well:

“I’m sad to see it go. It had a great run. 15 years is quite the run for any TV show. I’m proud of what the show did and to be a small piece of the show. We’ll be out there for the finale and do some different things. It will go out with a bang, for sure. It will be the biggest thing of all things on TV that night. Hopefully all of the winners can get together and do our thing.”

As for after the tour, Scotty is back to the grind completing his upcoming album with producer Frank Rogers. A little taste of the album, a new single called “Southern Belle” was recently released to hold fans over until the record is complete. [See video above]

He says of the new single, “It’s a little sampling of what’s to come. I’ve spent a year and a half without putting out new music so I’m antsy about getting it out there. Hopefully the fans are loving it.”

McCreery is a humble kid who knows, “I’ve got a long ways to go before I can even mention my name with the likes of Carrie Underwood or Kelly Clarkson, but I’m working towards it.” Maybe not yet, but an American Idol crown, one Platinum-certified + one Gold-certified record, and thousands of loyal fans coming to check the live shows certainly is not a bad place to start. 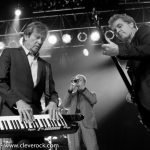