The Alternative Press Music Awards will honor Rob Zombie and X with the Vanguard Award and Icon Award, respectively. These highly deserving artists have been pioneers in their genres for many years. Here’s hoping both show up to accept their awards with balls out acceptance speeches.

Hard-rock legend and acclaimed filmaker Rob Zombie will be presented with the Vanguard Award. Perhaps the only artist in history to gross millions in both music and film, Zombie has sold more than 15 million albums worldwide and has grossed over $150 million as the writer/director of six feature films. He has continuously challenged audiences over the course of his career. His smash singles include “Living Dead Girl,” “Never Gonna Stop (The Red Red Kroovy),” and “Foxy Foxy.” His critically acclaimed live shows are second to none!

This year’s Icon Award honorees are none other than American punk-rock mavericks X. X were one of the most influential bands to emerge from the Los Angeles punk scene of the late ‘70s. The group’s first two albums, ‘Los Angeles’ and ‘Wild Gift’ both appear on Rolling Stone’s Top 500 Greatest Albums Of All Time list. Frontwoman Exene Cervenka shares, “Alternative Press came out of the American heartland as a local fanzine, and grew to be an important source for music lovers everywhere. Thank you for bringing X along with so many other artists into people’s lives! We are honored to be recognized and given this award.” 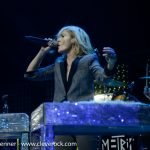 It’s here! The Phantom of the Opera!