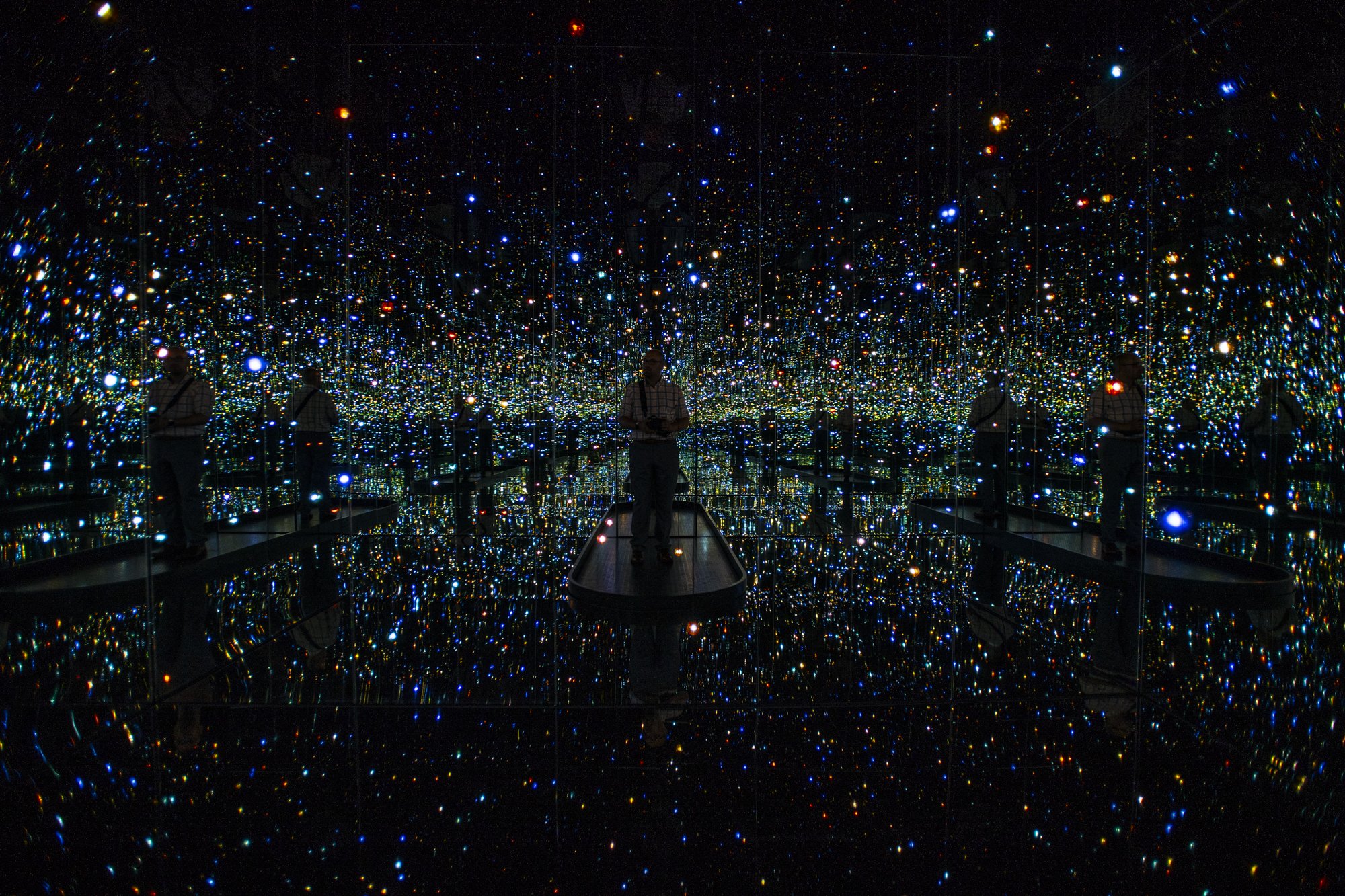 Since the beginning of summer, the Cleveland Museum of Art has become the center of attention for more than just Cleveland Institute of Art, kids.  Infinity Mirrors opened its three month run in Cleveland back in July.  The appeal for this exhibit was staggering, and at $30 a ticket it felt like everyone in Cleveland was battling to get access.  Citizens of Cleveland became professional art critics just like how every American turn judge during the Olympic Gymnastics with their existential interpretations of the exhibit.

Tickets went on sale back in May with tens of thousands of people willing to wait in their virtual lines for hours on end.  The majority of Infinity Mirrors tickets sold out for the summer in just a few days.

Yayoi Kusama, the 89-year-old artist behind Infinity Mirrors, has spent over the last 60 years creating this monumental artistic achievement.  Living voluntarily in a mental health hospital within walking distance of her studio, Yayoi uses her art as a way to process her troubles. It’s fair to say Kusama lives and breathes for infinity mirrors and the concepts of life, death, purpose and more associated with each piece.

Cleveland was provided with a one of a kind exhibit: Our own infinity box that was only to be displayed while Infinity Mirrors had its run in Cleveland (though it’s rumored that it might get to stay after the exhibits run is over.)  You could step inside the box, where hundreds of tiny holes have been peppered throughout the mirrored surface, letting the natural atrium light in, causing a galaxy before your eyes.

After you viewed Cleveland exclusive box you were then escorted downstairs where the exhibit took over the entirety of the lower level.  Once you were down in the lower level you could stay all day.  The immersive exhibits consisted of room sized cubes that were lined with mirrors on all six sides.  Once you entered at box you were closed in and given 30 seconds of “infinite” bliss.

Many of the exhibits were larger than life, meaning that you could literally walk inside of them. There were six total “infinity rooms” that you could walk inside and fully immerse yourself in. Though you were only allowed inside the rooms for 30 seconds at a time, you were allowed to circle the lower level as many times as you’d like.  In the gallery space between the rooms, there were intricate paintings and unique stuffed and often phallic sculptures from Kusama’s life as an artist. For these pieces, there was no time limit, and though many visitors were tempted to brush past them and rush into the mirror rooms, the artwork told it’s own story of a passionate, curious and scared woman.

Unlike most modern art, photography was not just permitted but encouraged.  Infinity Mirrors even had its own hashtag #infinitekusama.  Anyone living in Cleveland with a social media account was likely bombarded with mirrored selfies surrounded with hanging lights and polka dots.  This only fueled the fire, as it made thousands more want to come and see what all the hype was about.  After the exhibits’ opening tickets were made available on Mondays just for visits that week.  Sure enough, every Monday morning at 9:00, 5,000+ people got online to get in line for their chance to visit Yayoi Kusama’s masterpiece.

There was one piece of the series that was interactive.  An entire floorpan including, office, living room, kitchen and playroom from ceiling to floor was painted completely white (and glued to the floor for consistency sake).  As museum-goers entered the room they were provided with seven circular stickers in various colors, and patrons were asked to place them anywhere they wanted in the room.  This gave us Yayoi wannabes a creative license to try to be “original” with where we could think to place our stickers.  Over the months Infinity Mirrors was open, millions and millions of stickers covered the once white room with five different colors living up to its name, Obliteration Room.  Only those who have tickets to the exhibits’ last day will ever get to see this piece fully completed.

Infinity Mirrors was more than an exhibit.  Not since the Cavaliers won the championship in 2016 has the city come together to celebrate something so rare.  For these three summer months, we were all around our various water coolers talking about the unique and eccentric pieces that Yayoi Kusama created.  “Which one was your favorite?” or “I wish I could have taken a photo in that pumpkin room!!” was heard around town.  Some people wanting to know more who hadn’t seen it yet and others yelling at you not to spoil it for them who planned to.  Infinity Mirrors was something that will be “remembered when.”

We often take some of the amazing things we have here in Cleveland for granted.  We overlook the world-renowned orchestra, amazing theater district, deliciously diverse food scene and one of a kind museum that, dare I mention, is FREE!  Cleveland did not disappoint when it came to participating in Infinity Mirrors.  We should be proud of ourselves as we set records and kept those poor museum employees busy until the late evening for months on end.  Most of all, we appreciated it.  We realized that this was something rare and we took it all in.