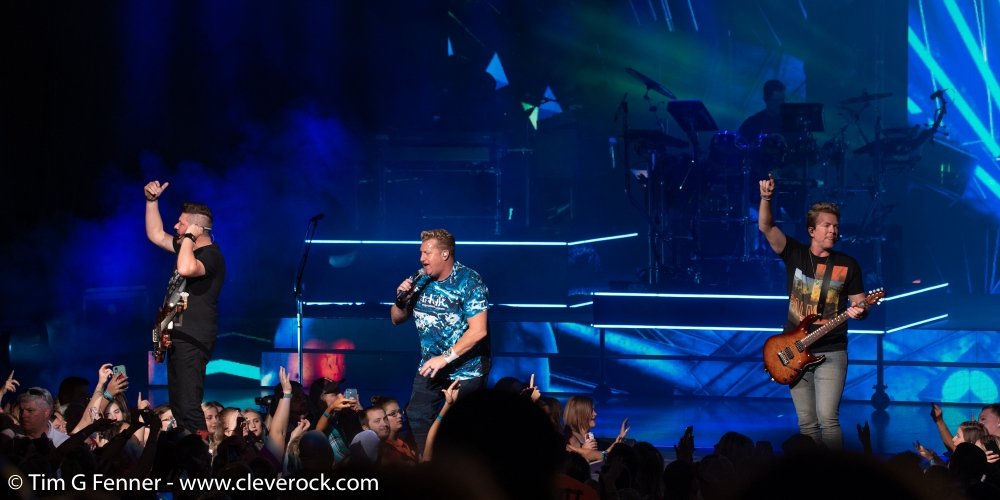 Blossom ended summer concert series with Ohio’s own Rascal Flatts on . They brought their “Summer Playlist” tour to Blossom Music Center to the perfect ending to a wonderful season of country music.

Their entrance on the stage was subtle as they strolled out from behind billowing curtains and began the concert singing “These Days’”  The crowd was already up on their feet cheering and swaying to and fro with the fans falling in love all over again with their harmonic and rich voices. It’s no wonder that they have ten albums and seventeen number one hits under their collective belts.

The lead vocalist Gary LeVox gave it his all, belting out his high notes with ease along with supporting guitar players and vocalist, cousin Jay DeMaracus and songwriter, Joe DonRooney. Their blended and crisp voices filled the cool night air. The band was very engaged with the energized crowd with Gary walking from each end of the stage and connecting with the fans.

The stage was backlit with a huge LED display. The crowd was singing along to songs like “I Like The Sound of That“, and “Mayberry.”  The fans knew all the words and sang in unison and became part of the band’s chemistry…. many memories were created tonight with fans the lyrics to each other loud and proud.

Rascal Flatts’ country roots are in Columbus, Ohio and the fans are clearly proud to be a part of their history and beginnings. The Playist Tour was the perfect setting to let the fans hear all of their favorites like “Summer Nights” and “Prayin’ for Daylight.” They have a fan base as they have been entertaining us and playing our heartstrings for 19 years.

They sang their hit “Back to Life” which has all the makings of a forever love song. This song showcased everyone’s talents with their well-seasoned harmony and vocal range as well as the band’s musical crescendos. The crowd swayed to and fro to this magical song. They once said that when they first heard this song they wanted to record it and were glad they did.

The stage LED screen was lit with the evening’s playlist as it rolled through the song options and landed on “Bless the Broken Road”. Mike Hics brings this song to life with his graceful piano chords. He added all the right touches to this beautiful ballad.

There was a segment in the show where they played a video interview of a young military man and his wife. He talked about how difficult it is to leave his young bride behind while leaving for duty.

“Life Is a Highway” was a fan favorite and got fans dancing and singing the chorus along with the band. The guitar riffs in this song were spot on.

Special guests Jordan Davis and Jimmie Allen got the evening started. Jimmie Allen was super energized to be there and he is pretty damn good. He’s got a classic country sound and his song ‘Best Shot.’ is a fan favorite. He grew up on country music and we offer him condolences on the recent passing of his father who he credits for his love of country music.

Jordan Davis from Shreveport, LA graced us with his song ‘Singles You Up’ which hit number one in 2018. His musical style is big on lyrics that you can easily connect with. He and his wife Kristen O’Connor are expecting their first child this year.

We want to mention that Rascal Flatts has partnered with The Jason Foundation, Inc. -Youth Suicide Prevention and Awareness  It was noted that each day 130 of our youth are lost to suicide. This is a silent epidemic that is taking too many lives. Learn more at iwontbesilent.com