‘Come From Away,’ the smash Broadway play that earned a Tony Award, three Drama Desk Awards, and a Grammy Award nomination, will open in Cleveland on July 8, with performances through July 28.

Speaking with CleveRock in a phone interview ahead of the engagement, cast member Matt Wong, who plays acoustic guitar, mandolin, octave mandolin, and bouzouki in the onstage, instrumental, nine-piece ensemble, says of the show: “A lot of people say it’s a 9/11 story, but we like to say it’s more of a 9/12 story. It tells the story of how they actively shut down the U.S. airspace after the attacks on 9/11, so planes coming to the U.S. from other countries got rerouted. They had to divert planes coming to the U.S. to another location. One of the places they picked was Newfoundland, Canada. Specifically, the Gander Airport. The reason we picked a 9/12 story is that it really tells the story of what happened after 9/11,” Wong explains. “It’s truly a story of kindness, community, and generosity. Basically, what happened was a town of 7,000 people, overnight, doubled in size, and it’s not just only Gander but a few other towns, which are named in the show, too. These people just took in, fed, get close to and give these people a place to stay over that week while they were stranded outside of the U.S.”

The book, music, and lyrics were written by Irene Sankoff and David Hein. The characters in the musical are based on (and in most cases share the names of) real Gander residents as well as some of the 7,000 stranded travelers they housed and fed.

One of the more interesting aspects of the show is that a nine-piece live band (including conductor and associate conductor) are onstage for the duration of the show.

“For two numbers, a song called ‘Screech In’ in the middle of the show and also the finale the band comes on and plays with the cast,” Wong said. “I’d say from talking to the music creative and also with the cast, it’s pretty important. Having the band onstage gives a sense of the whole humanistic experience,” he continued. “It’s a contemporary musical score really that’s inspired to authentic to the area. From talking to people who’ve been there and are from there. We actually got a chance to meet the people are from Gander and the people who were stranded there. Music is very important to that area. That song, ‘Screech In’ is actually a bar scene where people just take their instruments out to play. Having the band there is an important part of portraying the setting that the story takes place in.”

Wong, a graduate of the prestigious Berklee College of Music, is on his first national tour at the ripe age of 21-years-old.

Wong started pre-school on September 11, 2001. He’s still able to recall, “my mom worked across the Hudson River, she works in Jersey City. I actually grew up in New Jersey. We lost several people during the attacks because my town is on the train line to new york, so working in new york was pretty common,” Wong said. “My mom was nowhere near the city that day. She was taking me to school that day.”

As Wong progressed to high school, his world revolved around music. “I started to play in my high school’s pit orchestra. I think my first show was Grease and I then did Legally Blonde,” he recalls. “Growing up, a couple of years after I started playing guitar, I was also playing the violin, too. I was playing in lots of orchestras and ensembles and jazz bands, and I had my little band outside the school.”

This interviewer’s grandfather was an accomplished mandolin player. Grandpa was drawn to the mandolin because he developed Polio in his early 20’s and could no longer stretch his left arm to play guitar. Assuming Wong received the Polio vaccine, out of sheer curiosity, what drove him to play mandolin?

“Mandolin is a pretty common instrument for working guitar players to double on. I started playing mandolin in college just because I had some interest in musical theater,” he explained. “I started playing on a lot of film scoring projects for friends, so mandolin comes up in a lot in these settings. That’s what drove me to play the mandolin.”

So, one might wonder the process of a 21-year-old, fresh out of college musician landed such a coveted gig.

“In college, right before I Graduated, a friend of mine in New York sent me a message saying they were looking to put together the cast for ‘Come From Away.’ He wanted to recommend me for it. I got connected to a contractor for the show and I sent some tapes to him of my playing,” Wong explained. “He asked me to record some specific numbers from the show. He wanted to hear some bouzouki and mandolin playing. I don’t actually own a bouzouki but I was able to find one and learn the music. The week of graduation I was in New York for a gig and my friend asked me to meet with him and the music supervisor. for ‘Come From Away.’ We had a meeting and I got to watch the show from backstage. A day later, I found out I got the gig!”

Come see Wong and the rest of the cast in the uplifting ‘Come From Away,’ at Cleveland’s Playhouse Square from July 8 July 28. Complete show and ticket information can be found on our events calendar: RIGHT HERE! 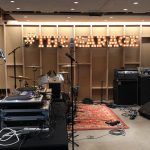