As a fan of a rising music act, it is equal parts fun and nerve-racking to watch them grow in popularity. For fans of Mike Rosenberg, who performs under the moniker Passenger, has shown tremendous growth over the past year, fueled by the smash single, “Let Her Go.” Just over a year after playing The Basement, a tiny venue in Columbus, OH, Passenger returned to the state’s capital, this time, welcomed by a sold-out house at the 1,700 capacity Newport Music Hall.

Before playing any music, Rosenberg said the first of many “thank you” varieties of the night. It was clear that he did not take his fast-earned success for granted and was genuinely grateful that he has come so far, so quickly.
Passenger opened the night with the mellow song “Fairytales & Firesides” from his 2010 release ‘Divers & Submarines.’ To brighten up the mood, he followed with an upbeat rendition of “Life’s for the Living,” followed by “The Wrong Direction,” both from ‘All the Little Lights’ the album that led Passenger to his success in America when is was released with Nettwerk Records in 2012.

Passenger told the first of a few personal stories that night while introducing his song “Riding to New York” from his most recent release ‘Whispers’ which dropped earlier this year. The song tells the story of a man on the side of the street who was smoking a cigarette, despite having lung cancer. The man was driving on his motorcycle from the West Coast to the East Coast in hopes to see his granddaughter again before he died. Rosenberg couldn’t quite explain why this man had touched him so much, but the beautiful song did all the talking for him.

Check out CleveRock.com’s exclusive concert photos of Passenger’s show in Columbus, OH on 08.19.14!

The night continued with a blend of happy and sad songs, each one telling a unique story. Passenger kept the mood light and joked frequently about being a solo, acoustic musician. “That’s as rock and roll as I get,” he laughed, after playing his very passionate song “I Hate” that was released as a live track on ‘All the Little Lights,’ simply rattling off a long list of things that piss him off. During this song and countless others, he encouraged crowds to clap, sing, snap and even whistle along and beamed as they obeyed.

The clear crowd favorite of the night was “Let Her Go,” Passenger’s first song to ever hit radio stations in the US and was the song that brought him into the spotlight. The tune was awarded Best Folk Singer/Songwriter Song at the Independent Music Awards in 2013. Passenger shared that he had no idea this song would get the attention that it did, especially because he wrote it in 45 minutes before playing a small show. Even after playing the song so many times now, he still managed to stumble over some of the words in the first verse, but laughed it off and pushed through, smiling the whole time.
[divider]
Passenger – “Whispers” (Newport Music Hall, Columbus, OH – 08.19.14) Video courtesy of Youtube user halle11780

[divider]
Other favorites of the night included “27” also from ‘Whispers,’ which was preceded by a powerful speech about perusing what you love no matter what anyone says or what the chances of failure are, and “Scare Away the Dark” from the same album. On these more upbeat songs, a soundboard technician could be seen on side stage adding a bass drum type kick and playing some background guitar to give a fuller band sound to the solo musician.

To please audience members both young and old, Passenger added two covers to his set, the first being “Wake Me Up” by Avicii and the second, “The River” by rock legend Bruce Springsteen.

Passenger ended the night with “Holes,” a heartfelt and upbeat song about going on in life despite having low points. Stating he has had his fair number of low points in life, the song felt even more meaningful. He spent a fair number of years playing on the streets and dropped out of high school at the young age of 16 to become a full time musician. Though he clearly had many “holes” in his life, and no doubt still does, Passenger hasn’t let that stop him from doing what he loves, and in his eyes that’s “playing to people who give a shit about real music.”

Passenger’s set was definitely the highest energy of the night, but opening performers Stu Larsen and The Once (both labelmates of Passenger) also put on great sets.

Like Passenger, Larsen came armed with no backing band; just an acoustic guitar, making him the perfect opener. Fans adored his new single, “Thirteen Sad Farewells,” from his July, 2014 release, ‘Vegabond,’ which has an upbeat vibe despite having sad lyrics. He also pleased the crowd with a hauntingly beautiful cover of Coldplay’s “Fix You.” His talents shined brightly despite and, despite having a short set, still managed to get the crowd ready for a mellow, fun night of acoustic folk music.

The Once wowed the crowd with their beautiful a cappella opener “Coming Back to You” from their self-titled album, released in 2010. The band’s performance was full of beautiful vocals, a variety of instruments (especially guitar and banjo) and heartfelt lyrics. The other fan favorite of the night was their closing song “We Are All Running” off their 2014 release ‘Departures.’ 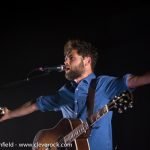 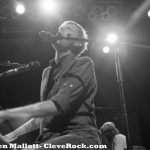