Nine nights after appearing in Cleveland to accept the Alternative Press Music Award for Best Vocalist, frontman Brendon Urie brought his band Panic! At The Disco to Jacobs Pavilion at Nautica, marking the act’s third appearance (second headlining show) in the Rock and Roll capital in less than a year.

A random, yet captivating video montage of kids dressed as cowboys preceded a countdown to the set opener, “Vegas Lights,” from the band’s 2013 release, ‘Too Weird to Live, Too Rare to Die!’ To keep the energy going, the band followed with “Time To Dance” from their 2005 debut, ‘A Fever You Can’t Sweat,’ a critically acclaimed album that kickstarted the band’s success.

When original members drop from a band, it’s not only an adjustment for the group, but also the fans. The band’s second to last original member, drummer Spencer Smith took a leave of absence from the band beginning in 2013. P!ATD’s current The Gospel Tour trek marks the first full tour without Smith behind the kit, leaving Urie as the lone original member. Urie needed but a few minutes to prove to fans that one original member is all that is required to put on a kickass show, demonstrating countless times throughout the night how incredible his vocal range is by hitting ear piercing high notes that somehow managed to stay in tune.

Urie started the show wearing his skin tight leather pants and now iconic gold blazer (that matched his gold microphone stand and gold drum kit), but his energetic dancing quickly got the best of him. During the song “Girls/Girls/Boys,” he pleased fangirls everywhere and went shirtless, mimicking the style of the edgy music video for the song. A great deal of energy was added to the set from the captivating screen projections that played for each song along with the multicolored strobe lighting. Smoke machines on the front of the stage were also featured a few times to help segue into the chorus for certain songs.

Throughout the night, Urie truly highlighted his talents as both a performer and musician. He played guitar on a handful of songs including “New Perspective” form the soundtrack of the film Jennifer’s Body as well as “Trade Mistakes” from the band’s 2011 album, ‘Vices and Virtues.’ He also showed his talents on the piano on the upbeat song “Nine in the Afternoon” from the band’s second album, ‘Pretty Odd’ along with the ballad he wrote for his wife titled “The End of All Things,” also from their latest album.

[divider]
As if the incredible musical talents Mr. Urie exudes are not enough, he showcased his over the top gymnastic talents before the last chorus of “Miss Jackson,” pulling off a courageous back flip from the drum platform, soliciting a roar of approval that could be heard across the Cuyahoga River.

As always, Panic! At The Disco ended the night with the most popular Panic! song from 2005, “I Write Sings Not Tragedies” from ‘A Fever You Can’t Sweat Out.’ Nine years after its release, fans still scream the words and dance along. At one point during the song, Urie was left speechless so that only the crowd could be heard singing. Panic! At The Disco exhibited why they are still drawing huge crowds after ten years, despite the lineup changes. They have phenomenal staying power. The show was the perfect way for fans, young and old, to have fun, be entertained, and immerse themselves in meaningful, enthusiastic songs.

A great deal of the fans’ energy throughout the night can be credited to opening bands Magic Man and Walk The Moon, who both gave high energy performances that got the crowd off their feet. Both bands were represented by a strong fan base. Magic Man’s single “Paris” from their 2014 album, ‘Before the Waves’ was a crowd favorite of the night, demonstrating why it was ranked on the Billboard Alternative Songs chart.

Walk The Moon brought a performance full of fun dance songs that really got people moving. Songs like “Jenny” and “Anna Sun” from their 2012 self-titled album were fan favorites on the night, as well as a new song, “Shut Up And Dance” which, as one would expect, really got the crowd dancing. Lead singer Nicholas Petricca jumped excitedly around the stage during their set, smashing on his rainbow floor toms and encouraging audience participation in almost every song. After such fun sets, there is no way these openers will soon be forgotten.
[divider] 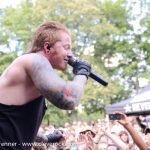 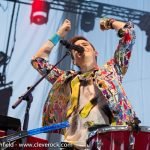 Caught on Camera: WALK THE MOON