The band that describe themselves as “Lady Gaga getting humped by The Offspring” (cue awesome visual), Cleveland based rock outfit One Days Notice released their first full-length record, ‘When Dinosaurs Get Drunk,’ today (09.10.13). [Listen or Purchase, HERE!]

Since forming in 2010 through the magical interwebs of Craigslist and MySpace, the quintet is comprised of vocalist Chris Bassitt, guitarist/vocalist Jesea Lea, guitarist David Vallo, bassist Justin Albaugh, and drummer Phil Evans Jr.

Bassitt and Lee phoned the CleveRock hotline on August 27, shortly after wrapping up a rehearsal for the band’s album release party, which took place on September 6 at House of Blues Cleveland.

Considering none of the guys in One Days Notice have celebrated birthday number 30 as of yet, the band is way ahead of the pack in what they have accomplished so far on a local level, including having graced the House of Blues stage a handful of times, opened for big name acts including The Offspring and Bowling Soup, and performed at the Warped Tour, just to name a few highlights.

For those unfamiliar with ODN’s sound, Lee said, “When we first started out we were going for that pop-punk sound really hard. I think style wise it looked like we just fell out of a Blink-182 catalog. But over time, we want to be a really good rock band. That’s our main goal.  I mean, we have our ballads and we have our slow songs and we still have our really fast, punky songs, and we have our really straight up rock songs.”

Bassitt added, “The Offspring is the band we get compared to the most. A rock band with punk influence; sprinkle in a little pop here and there.”

Having released just one EP prior (‘…That’s What She Said’), ODN brought in two big names to produce ‘When Dinosaurs Get Drunk,’ one being Jim Wirt (Incubus, Something Corporate), and the other, Ben Schigel, who has worked with Machine Gun Kelly (arguably the biggest act to come out of Cleveland in recent years).

“Jim has worked with so many different people; his ear for music is just unbelievable. We’re all just dudes that play music for fun, basically, and he’s worked with some huge names and has an ear for the tiniest details, which just brings a whole lot out,” Bassitt stated.

While Wirt and Schigel brought a lot to the table, ODN said they never lost their own vision for the record during the recording process.

“This is the first album that we did from start to finish exactly the way we wanted to,” Bassitt said. “We worked with some great producers, but we did all the creative thinking, for the most part, which is cool….being able to do things exactly our way.”

[More after the jump…]

[divider]
One Days Notice first single from ‘When Dinosaurs Get Drunk’ : “Haha”

While it may be a more difficult path to success coming out of a smaller market like Cleveland, Lee notes there are advantages, “I think a small market is the better. I like being in Cleveland and have 500-1,000 fans coming out for a show and filling up places like House of Blues as opposed to going to New York where there are so many other great bands. We love Cleveland and we’re all super proud of our hometown. We try and represent as much as possible.”

[box_tip]One Days Notice is currently in the running for a slot at Epicenter Festival in Irvine, CA. Votes can be placed,  HERE![/box_tip]

When asked about a goal for the band over the next year, Bassitt said, “Our goal is just to try to win the crowd over with our show.”

Lee mentioned loftier aspirations, saying, “Obviously, we would all really like to sign a record deal. We’ve been offered deals before where it doesn’t make sense on either end. We need a label that shares our team vision in the end, and do what they need us to do. And, give us bags of cash. Basically, no label has come to us with a bag of cash yet.”

If One Days Notice can push themselves to replicate the success they have had in Cleveland across other markets, the bags of cash they seek could very well become a reality.

[divider]
Catch ODN at one of their upcoming shows: 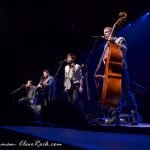