NOFX concert review from Cleveland’s House of Blues on December 4, 2013. Special guests The Implants and Off With Their Heads.

It was an unusually warm Wednesday night (12.04.13) as Los Angeles punk-rock legends, NOFX took the stage at the House of Blues in Cleveland, Ohio. Frontman Mike Burkett, more commonly known as “Fat Mike,” approached the packed, sweaty crowd and said “My 9-year-old daughter is watching, so no bad words.” If you’ve ever listened to NOFX, you know that the likelihood of a set list with no bad words is as likely as a Taylor Swift album that doesn’t bash one of her many ex-boyfriends. Needless to say, that didn’t happen.

Fat Mike (vocals, bass) rocked the house with his energy and punk facets, including his blue mohawk. Of course, he had an incredible band backing him up. With “El Hefe” (Aaron Abeyta) on lead guitar (and trumpet), Eric Melvin on guitar (and accordion and keyboard), and Erik Sandin on drums, the quartet shined as if they were in their twenties again. For a bunch of middle-aged punk men, NOFX radiated with exuberance. The swarm of moshing fans extended the same radiance as they danced all night, singing along in between breaths.

As part of their 20th anniversary tour, the band covered a broad spectrum of 20 songs, dating as far back as their 1994 album ‘Punk in Drublic,’ including “Perfect Government” and the well-known, fan favorite “Linoleum.” Also played were “Seeing Double at the Triple Rock,” from 2006 album ‘Wolves in Wolves’ Clothing,’ and “Cell Out,” from 2012 album ‘Self Entitled.’ The punk rockers even performed songs from their different EPs, such as “Fuck the Kids,” from 1996 EP of the same name and title track from the 1999 EP, ‘The Decline.’

About halfway through the set, NOFX paid tribute to the late Tony Sly, vocalist and lead guitarist for former punk rock group No Use for a Name, who collectively decided to disband after Sly’s death last summer. The band performed a cover of “The Shortest Pier,” which appears on Fat Wreck Chords’ ‘The Songs of Tony Sly: A Tribute,’ released in October of this year.

It’s hard to determine which songs were crowd favorites because the pit never stopped moving. However, I noticed exceptional enthusiasm during “Murder the Government,” from the 1998 album ‘So Long and Thanks for All the Shoes,’ “The Separation of Church and Skate,” from the 2003 album ‘War on Errorism,’ and “We Called It America,” from the 2009 album ‘Coaster.’

Whoever named the band’s 1995 live album ‘I Heard They Suck Live’ was hilariously mistaken, because NOFX put on an excellent show and the fans were more than pleased with what they saw.

A portion of the crowd’s energy should be credited to the opening acts, The Implants and Off With Their Heads, whom both kept up the hype in preparation for the main event. I was surprised to see such a decent crowd for The Implants, who opened the show, as people usually hide in the back until the headliner plays. However, I understood why listeners gathered so abruptly — they were good musicians. The Implants are a collaborative effort among musicians from other rock groups, including Rob Ramos from Strung Out, Jim Blowers from Pulley, Ken Conte from The Tank, and both Chris Del Rio and Chris Dalley from Ten Foot Pole. After a short set, The Implants said goodbye, and Off With Their Heads performed as the mosh pit grew bigger with each song. The crowd raved at the set list made up mostly of songs from their newest album, ‘Home’ which was released in March, 2013. The album, produced by Bill Stevenson from The Descendents, is the Minneapolis punk rockers second album via Epitaph records.
[divider] 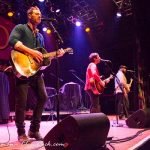