Nickelback brought their Feed the Machine world tour to Blossom last night in support of their ninth studio album of the same name.

The Chad Kroeger fronted Canadian outfit hit the stage with an impressively flashy setup, which included a HUGE LED screen behind the band which alternated between a live video feed and showing images from their videos. The crowd was a heady mix of different characters- older married couples, biker couples, parents with their teenage kids and dope smoking partiers eager to buy all the beer and glow in the dark paraphernalia that they could handle- they were all there. And they all seemed to come in the form of a couple, who inevitable would kiss, hug and slow dance to the plethora of recognizable songs Nickelback played throughout the night.

The last time I saw Nickelback, which, I admit, was more than a few years ago, I thought they were fairly boring, but this time around, the band played a solid set and kept the crowd entertained between songs with Kroeger’s banter- sometimes funny, sometimes a bit vulgar, but always interesting. By the third song into the set, “Photograph,” the Nickelback frontman already had the crowd eating out of his hand (and crying and hugging each other) between his surprisingly ferocious vocals and his onstage banter with the audience. The band zipped through many of their hits but made “Rockstar” the “rockstar” of the night.

Kroeger pulled two audience members out of the crowd to do “karaoke” with him on “Rockstar.” The woman he pulled on stage was very scantily clad and Kroeger encouraged her calisthenics while calling her a “MILF” (Hey, Grandma, Urbandictionary.com). She didn’t seem to mind and played up her sexiness to the rest of the band and the crowd. After about 10 minutes of good-natured ribbing, Kroeger sang along with the duo and even let the duo of audience members take the chorus themselves. Shortly after, Nickelback surprised the crowd yet again by requesting a full audience sing along to a song Kroeger stated “I wish I wrote”- “Hotel California” by the Eagles. It really did get all ages singing along and swaying to the beat of the classic tune. A Nickelback show would not be complete without “How You Remind Me,” their first smash hit that, during its run, was one of the top-selling tunes of all time. The crowd left hugged and kissed out, happy; satiated with hits.

Daughtry was tapped as the opening act for the massive tour, which proved to be an excellent decision, as frontman Chris Daughtry wowed the crowd with his strong vocals that were no less excellent than when he was on American Idol. It’s hard to believe that the season he appeared on American Idol was 12 years ago and that Daughtry has still managed to keep his head afloat, unlike some other Idol alumn.  He hasn’t aged a bit in appearance, and his voice has only seemed to blossom and become sure-footed over the years. It was refreshing to see that Daughtry had not decided to opt for a flashy stage show or an elaborate lighting scheme- Chris managed to stay true to himself, his sound and his look over the years- simple but intense. “Feels Like Tonight,” an early song in the set, resonated well with fans but there was an issue with the mixing. The backing vocals were turned up too loud, which made Chris’ voice sound somewhat muddled; however, it seemed that after the third song, “Crawling Back To You,” the problem was resolved and you could hear his voice clear as a bell. After a moving version of “Life After You” from Daughtry’s second album, ‘Leave This Town,’ the band surprised the crowd with an acoustic cover. As the first notes of Metallica’s “Nothing Else Matters” slowly wafted out from the keyboards onstage, the crowd went mad, and Chris Daughtry’s vocals on the tune were haunting, yet totally his own- Thankfully, he did not try to imitate James Hetfield. Daughtry also pleasantly surprised the crowd with a new track from their upcoming, yet untitled album- a track called “Backbone.” The heavy intro was followed by a catchy and bombastic, stompy tune that upstaged many of the other songs in the set with its seething, raw tone. 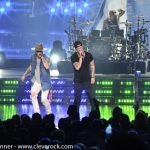