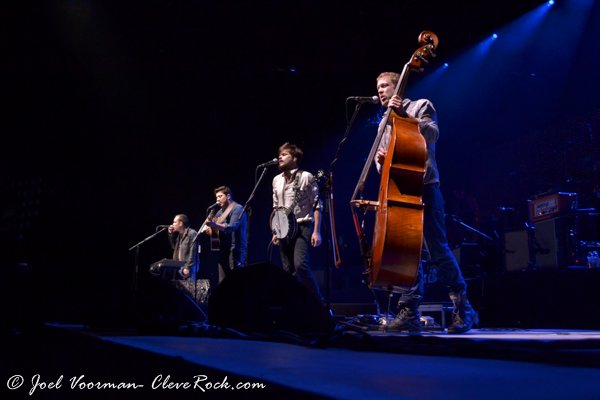 Epic fail at capturing Mumford & Sons concert photos! I went to First Niagara Pavilion more/less to review the show, but thought I would try my hand at snapping  photos, too. I entered the pit with the other photographers (including a super stoked Ohio State student), just moments prior to Marcus Mumford and his “sons” taking the stage, and immediately struck up conversation with some cute girls in the front row. By the time we finished chatting, Mumford & Sons’ videographer had taken his place in the pit, his large camera and body now blocking me access to the center of the stage and stage right, leaving me trapped stage left! To make matters worse, Mumford & Sons performed half of the first song, “Lover’s Eyes,” in complete darkness. This was great for dramatic purposes, but sucked as a photographer trying to get some decent shots. I was able to snap a few decent photos the entire band, who  lined up in a horizontal line across the stage, with a cast of supporting musicians on a raised platform behind them.  The rest of the photos came out pretty much garbage and are not even worth posting. I still put together a solid review of the show and had a lot of fun being so close to Mumford & co. During my time in the pit, in addition to “Lover’s Eyes,” the guys also played “Little Lion Man” and “Whispers in the Dark.”