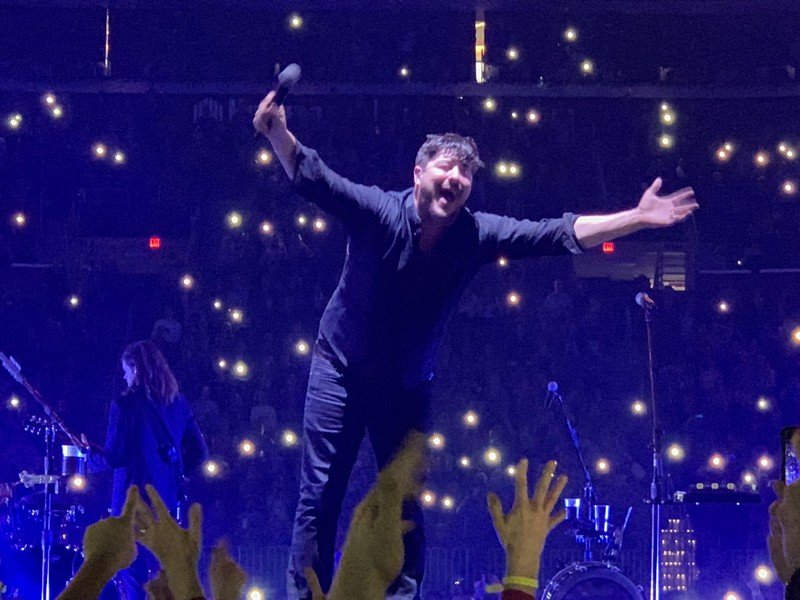 The band has been touring the world in support of its fourth studio album, ‘Delta,’ released September 20, 2018. The tour started back in November 2018 in Ireland and features a self-described “ground breaking” theater-in-the-round set up. The stage was plunked in the middle of the arena and featured mirror-image microphone and kick drum arrangements facing both ends of the building. The symmetrical configuration allowed lead singer Marcus Mumford to work the crowd in all directions, often switching sides of the stage from verse to verse during songs. Guitarist/banjoist Winston Marshall and bassist Ted Dwane also used the centerpiece stage to play to numerous angles, leaving Ben Lovett and his piano as the only stationary band member.

On a round stage, who’s to tell which is stage left and which is stage right, but Mumford & Sons walked in from behind the drum set and promptly launched into the staple show opener, “42.” A fitting ice-breaker off the new album that quietly, with all four voices in harmony, builds to a crashing finale after Marcus pleads “But what if I need you in my darkest hour?”

There’s been little variance to an effective set list and Cleveland’s tour stop was no different. After saying ‘hello’ and waves to the cheering crowd, the band doubled down on ‘Delta’ tracks, playing the lead single from the new album, “Guiding Light.”

The stand-up bass makes its first appearance when it’s handed to Dwane and they play the song that put them on the map, “Little Lion Man.” The hit electrifies the crowd and Mumford let the near-capacity crowd sing the chorus for him. I read an interview with Marcus and he said he couldn’t understand artists who say they grow tired of playing their hits. He couldn’t understand why you wouldn’t want to play the songs that your fans grew to adore you over. The giant, genuine smile on his face during their breakout hit proves the sincerity of his statement.

The energy level remains high as they blast their way through “Babel.” During the massive ovation after the final thump of the title track of their second studio album, Mumford takes the opportunity to jump behind the drums for “Lover of the Light” next.

Marshall and Mumford both strap on electric guitars for “Tompkins Square Park.” Prior to dipping back into the new album with the mellow, rhythmic “Woman,” Lovett takes a moment to reminisce that they first played in Cleveland in 2010. He gets a laugh when he says it was a smaller catalog of songs and much smaller venue back then.

They zig back to ‘Babel’ for “Holland Road” then zag to ‘Delta’ for the latest single “Beloved.” Mumford takes a poll, asking who in the crowd is seeing them for the first time. He then asks who has seen them before and the response makes it clear the majority of the 18,000 in attendance have had a taste of the M&S live experience before.

The stand-up bass returns for “The Cave” and sends the crowd into a frenzy again. Mumford parlays that by jumping into the crowd during “Ditmas” and proceeds to climb his way through three different ticket prices, all the way up to the last row of the first deck. The spotlight finds him at the railing and they throw the image of his outstretched arms on the hanging monitors as the crowd roars their approval.

With a fresh sweat breaking, Marcus asks the crowd to take out their cell phones and The Q lights up like a starry night in the country for “.” He catches his breath a bit with “Picture You” into “Darkness Visible.” The arena literally explodes as they bust out the pyrotechnics for “The Wolf” then walk off the stage for a brief intermission.

There are five musicians spotted playing multiple instruments such as trumpet, trombone, violin, mandolin, keyboards, rhythm guitar, and drums. None of them are needed for the first song of the encore though, as all four members gather around a single microphone. Mumford expresses his appreciation for the audience but wonders if 18,000 people are able to “shut the fuck up” for a few minutes while they play a delicate “Timeshel.” The joke goes over well and approximately 17,990 people are able to follow instructions.

Possibly the loudest ovation of the night comes with the opening chords of “I Will Wait.” The title track of the new album, ‘Delta’ closes the show with a bang and confetti, likening the Q to a ticker tape parade.

The evening was stuffed with 19 songs in all. Each one was a tidy, but spirited version of the original. The stage-in the-round successfully provided a feeling of intimacy despite the large venue, and at the same time made you feel like you were attending a concert in an 18,000-seat, thumping subwoofer cone as Mumford & Sons unleashed their trademark intensity. 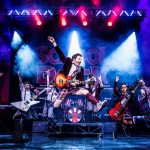 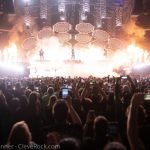