The Beachland Ballroom was hopping with fans of all ages last night (Monday, 05.05.14) to see the duo of Joe Ryan and Kenneth Pattengale, together known as The Milk Carton Kids. This show marked the band’s seventh stop at the Beachland, with crowds getting bigger and bigger each time through town. This time around, the show sold out well in advance. Typically a standing room only venue, rows of seats were placed in the space closest to the stage, taking into consideration the relaxed vibe of the folk music performers. From the folks who lined up well ahead of show time, to the stragglers that strolled in late, everyone was excited for an evening of great music at the intimate venue.

The room filled with applause and cheers when the duo from Eagle Rock, California took the stage, but a respectful silence fell immediately as the gentlemen picked up their acoustic guitars and took their respective positions around the microphone they shared. The band opened with “Hope of a Lifetime” from their 2013 release, ‘The Ash & Clay.’ The audience was itching to sing along with Pattengale and Ryan, but instead, took in every note of every line as the men sang softly. It was refreshing to see an educated audience that realizes that behavior protocols are different for a folk duo’s show than an arena rock spectacle.

The band followed with four more songs from the new album, before finally addressing the crowd. In between songs, the guys used their dry humor to crack jokes and interact with audience members, occasionally cracking smiles of their own. At times, the show was nostalgic as Joey and Kenneth reflected on their beginnings as solo musicians and seeing each other play in small pubs, but the mood was quickly broken with more playful, insulting jabs at one another.

Many numbers showcased acoustic guitar solos from Pattengale, drawing booming applause and cheers from the crowd.

“Honey, Honey” was a particular crowd pleaser and a song that truly highlighted Kenneth’s musical abilities. Both members performed vocal solos in select songs during the set, but the true beauty of the band’s songs shined with their perfectly tuned harmonies.

Prior to playing an unreleased song, Ryan requested the audience put their smart phones away, stating he did not want the first exposure of the tune to be some “shitty iPhone video.” The crowd laughed, but obliged his request, choosing to enjoy themselves in the moment.

After exiting the stage, The Milk Carton Kids were beckoned back for an encore, which included fan favorite “New York” from the duo’s first studio album, ‘Prologue,’ and “Memphis” from ‘The Ash & Clay.’

While waiting in line to meet Joe and Kenneth post-show, a man approached my friends and I, all teenagers, and questioned if we were all true fans of folk music. Our enthusiastic affirmation brought a smile to his face, happy that a younger generation appreciates classic, indie folk music. The Milk Carton Kids proved to be down to earth and gracious that my friends and I contributed to the collective group that sold out their show. 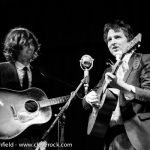 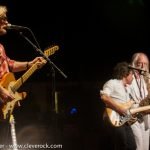 Caught On Camera: Hall and Oates