If you are not feeling the energy from the amazing city of Cleveland, then you, my friend, must be dead. This city is alive and thriving; and, woven between the seasonal graduation and proms, the Cavs winning playoff streak, and the ever continuous preparation for the 2016 Republican National Convention, stood a line of sold out ticket holders for Tuesday night’s Matt and Kim show at the Cleveland House of Blues.

Touring in promotion of their latest album ‘New Glow,’ Matt & Kim have become notorious for their live shows filled with balloons, a$$ shaking, confetti, banter and of course, the quick fire catchy beats that- as it happened in Cleveland – made the floor shake at the House of Blues.

On a previous tour supporting Passion Pit, the duo cancelled their Cleveland performance due to illness. “Cleveland, you are the only show I have ever canceled; and for that I’m giving you 200% tonight because you deserve it.” Kim Schifino stated amidst a previous shun by Matt earlier in the set. “It’s like we’re on the first date and you’re all looking sexy,’” Matt commented. “Now is not the time to talk about vomit; but now that we know each other more, you can bring it back up.”

With material to pull from multiple albums, the duo balanced the evening with both new tracks from ‘New Glow’ including “Hey Now,” the opening track off their April 2015 release, “Get It,” and “Can You Blame Me” along with tried and tested crowd pleasers from their former 2012 release ‘Lightning’ which included vivid visuals for Now and one of the opening songs for the evening “Let’s Go.”
[divider]

Kim, notorious for her amazing dancing did not disappoint, rather, feeding off the crowds energy as the band bantered and engaged the fans. It’s obvious the two are smitten not only with each other but their fans as well. This carries through from their live shows to their interactive social media campaigns, with the latest being an open call to submit music videos using Matt and/or Kim’s face while lip syncing to “Hey Now.” Further crowd support came early on in the evening when, Matt and Kim threw balloons out to the crowd instructing to blow them up and “1,2, 3, throw your balloons in the air and let’s get weird!”

The evening also included a cover of R. Kelly’s Remix to “Ignition” during one of a few moments the band could calm down and lower the pace. “Greatest exports of America ‘R. Kelly’s Remix to Ignition,” Matt stated just prior to segueing into “Good to Great.”

Playing just over 90 minutes, the party ended in an epic display of confetti.
[divider]

[divider]
Waters the opening act who hails from Oslo Norway by way of San Francisco provided a clear juxtaposition to the striped down two piece band Matt and Kim entail. Waters, with five members, including multiple guitarists, one keyboardist and a drummer provided the crowd with a truly unique and one of a kind style that touched ever so slightly on the Ween, Arcade Fire and Edward Sharpe.

Lively and animated, the band has toured with Matt and Kim the past month in promotion of their new album ‘What’s Real.’ However the real crowd pleaser Tuesday evening was the band’s Taylor Swift “Blank Space” cover as well as “Stupid Games” and “What’s Real.” Strewn with fake flowers, the band equally interacted and bantered with the crowd and provided a colorful, and poppy sweet warm up to the Matt & Kim set.
[divider] 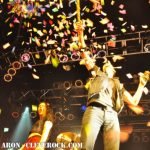 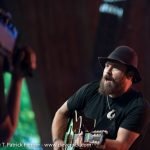