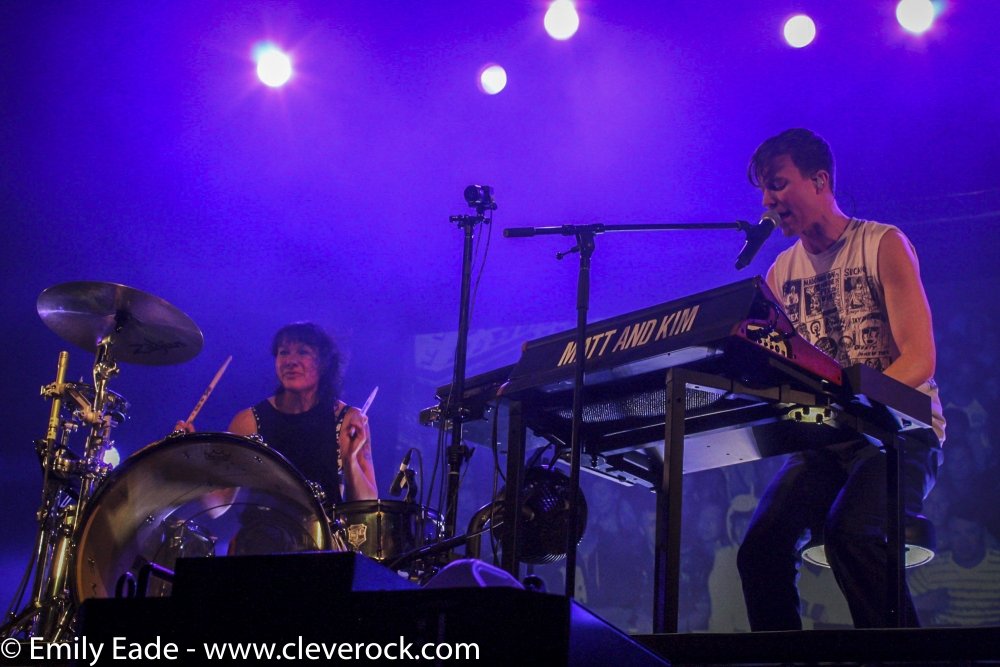 Electronic duo Matt and Kim from Brooklyn, New York band brought the first show of the tour to Agora Theater in Cleveland on October 17, 2019. Starting the 10th anniversary of their album ‘Grand’ the band was excited and energized as ever to take the stage.

With the celebration of ‘Grand’ came the responsibility for the couple to make it the best concert ever. Believe me, they performed a very, very unforgettable concert. The warning the posted on their website stating, “Don’t bring your kids if you are uncomfortable with them seeing mature content” was truer than ever for this show.  Let’s just say flashing, sex toys, and blowup sex dolls were all included in the show.

The crowd roared in excitement as Matt and Kim ran out on stage to “Thunderstruck” by AC/DC. They started off this memorable concert with playing songs off the album in order. Starting with “Daylight” causing the audience to automatically sing and dance along. They continued on with songs “Cutdown” and “Good Ol’ Fashion Nightmare.”

With the excitement about the 10 year anniversary of ‘Grand’ Matt and Kim talked to the crowd. Matt brought up how his wife Kim tore her ACL while performing during their last tour. Kim expressed her sadness of having to cancel previous shows, saying, “I want there to be moshing and crowd surfing and I’m probably going to show you my titties.” The duo radiated excitement about being back on the road, encouraging mosh pits and crowd surfing. The audience was noticeably having the time of their lives.

They then continued on with the with performing ‘Grand’ in its entirety. Starting with “Spare Change” and “I Wanna.” Next they played “Lessons Learned” with well projected strobe lights and confetti everywhere.

While playing “Don’t Slow Down,” Matt and Kim threw blowup sex dolls into the crowd. Kim also was drumming with sex toys and swinging them around. During this concert Kim wanted to try something new by splitting the audience in half and one que both sides had to run at each other. They did exactly that, and somehow shockingly it didn’t look like anyone got hurt in the process.

The couple both were explaining how band came to be and the story behind the album. Although ‘Grand‘ is only a 28 minute long album, it took Matt and Kim over an hour and a half to play the whole album. They ended the show with their new singles “Money” and “GO GO” which came out that night.

A high energy band like Matt and Kim needs a high energy opening act, and San Diego surf band Beach Goons was just that. Playing their hits “Reservoir Dawgs,” “Without U,” and more. With only two albums that band had numerous hits! The band’s bassist David joked about how there was no mosh pit going on and how “chill” the crowd was. The band’s drummer Chris was a Cleveland native and expressed his excited to play a hometown show. The band ended their performance with playing the hispanic hit “La Bamba.”