Nickelodeon game show hosting superstar Marc Summers will celebrate birthday number 67 in Cleveland when he is in town with the Double Dare Live! tour at PlayhouseSquare’s KeyBank State Theatre on November 11!

For readers over the age of 30, Summers needs no introduction. He hosted the game show Double Dare (and its variations, Supper Sloppy Double Dare as well as Family Double Dare) on the kid-friendly Nickelodeon network from 1987-1993.

The show was part trivia; part “physical challenges” — where contestants were asked to compete in ridiculous, yet fun (and of course, challenging), games/tasks/obstacles. It was not uncommon for a contestant to be wearing a pie in the face or be covered in Nickelodeon’s famous green slime by the end of the activity.

After much persistence from Summers, Double Dare got a reboot this past summer, in which he returned to provide color commentary for physical challenges alongside host Liza Koshy.

Summers was asked to explain how a show that had been off the air for essentially 25 years (save a forgettable, short-lived, non-Summers hosted Double Dare 2000) suddenly returned after a 2.5 decades hiatus? As it turns out, it was not so sudden.

“I’m the one that motivated it! I’m the one who made it happen,” Summers exclaimed in a recent phone interview. “I’ve been pushing them for the last ten years, saying, ‘Now’s the time. Now’s the time.’ They kept saying, ‘No. No. No. No. No.’ I woke up one day in March or April to an email that said, ‘Give us a call.’ They told me my persistence had paid off. That’s kind of how the whole thing happened.”

With the series successful reboot, Summers had another idea to get off the ground: taking the show back on the road!

“The tour was sort of an idea that I thought, ‘Maybe this is a good idea?’ The next thing I knew, we are booked in 15 cities over an 18 day period. We’re doing really good sales and people seem to be interested in it,” Summers said. “A lot of it is people in their thirties trying to relive their childhood and then a whole new generation of people who are 9-years-old or so who just discovered the show. It will be a great family entertainment situation.”

This isn’t the first time Double Dare has taken to the road, just the first time since the turn of the millennium. The show previously made stops in North East Ohio with Summers in tow during the show’s heyday. Mark came through the Cleveland area multiple times between 1988 and 1994, including a stop in Beachwood and one in Cleveland where he recalls:

“We played somewhere in the flats when Micky Dolenz from the Monkees was our opening act and he had an album out on childhood lullabies, which is not a great opening act when you’re trying to get all of this energy going,” Mark said with a laugh. “I’ve been to Cleveland a handful of times. It’s a great city.”

This time around will undoubtedly be a little different. So, what can fans coming out to see Double Dare Live expect?

“It’s still a work in progress. We go into rehearsals next week. My goal is to get as many people on the stage as possible. I keep getting emails and Instagrams and Facebook comments saying, “I’m thirty-something, can I still get onstage?’ That’s cool to see,” Summers said.

So…yeah…about being thirty-something and wanting to be in the show? (umm…asking for a friend):

“We’re trying to figure out an interesting combination of bringing kids and adults in some sort of competition in Act One, and do a ton of physical challenges,” he revealed. “In Act Two, we play this game that we revived from the tour back in the day called Musical Pies, where we bring people up and, instead of musical chairs, when the music stops, if you’re holding that pie, you have so smash yourself in the face with it. We’ll also bring some families up to compete in the game just like you’re watching it on television.”

Alas, Summers had no definitive tips to get onstage for kids-at-heart wishing to live out their childhood dream of digging for flags in a Double Dare obstacle course. But he did promise, “We’re going to get the audience involved as much as possible and bring the show as you’ve known it on the air into the arena. We’re trying to bring the best of all worlds to the people that are going to be there and watch.  It’s going to be a mix of the old and the new. Some of the things that people your age [35] might remember, and then obviously we built the obstacle course and physical challenges to reflect what the show is now with Eliza and me. Trying to please the audience of ages seven to 70 is sometimes difficult. We’re going to do the best job we can in the process.”

“I started Double Dare when I was 34-years-old. It was my first big success,” Summers recalls. “I was also a bit overwhelmed. At this point in my life, I’m sitting back and having more fun and enjoying it more than the first time around.”

When questioned about a favorite moment or memory from the previous Double Dare years, Summers was hardpressed to pinpoint anything specific. However, he did reveal:

“It was always so funny how the kids did it just to have fun. Then when it became Family Double Dare, the parents wanted to win at any cost. Some of them tried to cheat. At one point we were giving away cars and trips to Europe so people got kind of nuts. The kids played in the purest form,” he said.

“Nickelodeon used to be the place where only kids win. We’re trying to bring that kind of attitude back,” Summers continued. “I think the parents come with a good attitude knowing that maybe they’ll get a pie in the face from their kid and took it in the meaning that it’s supposed to be. It’s just all fun. 32 years I’ve been going this thing. It’s hard to believe.”

Summers stressed the importance of the show filling a narrow niche on television: It’s something for the whole family to enjoy together. “There’s not a lot of television where moms, dads; kids can all sit down together. We have somehow managed to merge two generations to sit there, have fun, and be entertained by the whole situation,” Summers said. “We’re providing a service and Nickelodeon probably does it better than anyone.”

One last thing Summers was asked before letting him off the phone: Where the heck has he been hiding since Double Dare went off the air? What in the world has he been up to?

“I produced the last four years of Double Dare. One thing led to another and I started producing some other shows,” he said of the next phase of his television career. “For Food Network, I did a show called Dinner Impossible, Restaurant Impossible, Food Feuds, and then I did Unwrapped, which is still the longest-running show on Food Network. I’ve had two interesting careers where I was throwing food at people and then my second career was talking about the food I used to throw at people. It’s been kind of a fascinating transformation from one to the other.”

Double Dare Live! the tour will stop in Cleveland on Sunday, November 11 at PlayhouseSquare. Head on over to our calendar entry for the event for complete details and ticket information. 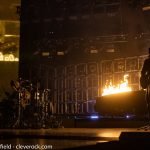 Les Miserables : A Revolutionary Show That Continues On