Lords of Acid brought mayhem and merriment to the Agora on Friday September, 29, 2017. It was a banner bill including Christian Death and Combichrist.

After Combichrist did a brief set including such songs as “What the Fuck is Wrong With You” and “Skullcrusher,” the level of energy in the crowd was becoming visibly palpable. No one could wait until Lords Of Acid went onstage.

Lords of Acid primed the crowd with every song off of their 1994 album, ‘Voodoo-U’ from beginning to end. Although principal member Praga Khan was notably absent (apparently for health problems), the rest of the band, including returning singer, DJ Mea (who joined the group in 2011), returned to remind us about the “Young Boys” and “Marijuana in Your Brain” of the good-old-years in the past and a not-so-subtle call for fans to embrace being uninhibited and joyous in their experience with music. An ever-present mood of never take yourself too seriously.

Dubbed the ‘Sextreme ’17’ tour, Lords of Acid lived up to the name with provocative favorites including “Pussy,” “Rough Sex/Take Control,” “Dirty Willy,” and other songs loaded with subtle and blatant sexual overtones.

Although the Agora had an insanely large amount of people crammed into the small Ballroom, when Lords of Acid took the stage, all anyone in the crowd cared about was dancing.  DJ Mea was unscrupulous in her gyrating with fans and she never faltered a note during the entire performance. It really harkened back to earlier years of Lords of Acid, where the singing was as important as the show. The boundless energy of Mea really kept the crowd going as she expertly played the role of consummate rocker extraordinaire. The elaborate costumes and flamboyant stage tactics of the past were set aside for some good old booty shaking.

A single song encore, “I Sit on Acid” left the crowd simultaneously sated by the killer show yet still wishing for me. 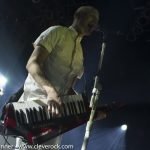 Lords of Acid w/ My Life With The Thrill Kill Kult, Blownload