[Below article “stolen” from the author’s published piece on MSN.com as part of the MSN Music Roadtour in 2005. Original publish date: 07.06.05]

On day four of my adventure at Summerfest 2005 (the world’s largest music festival), I found myself concluding an interview backstage with Jacksonville, Florida rock outfit Shinedown when one of the best new bands I have discovered on my summer journey, Halestorm hit the stage. 30 seconds into Halestorm’s set, Shinedown vocalist Brent Smith was forced to pause in the middle of a response to one of my questions. I sat with the band in silence as we all listened to what, at the time, was an unidentified sound. After a brief silence, Smith asked his bandmates if the sound was a wailing guitar, or perhaps it could be something else? A brief debate followed and we all eventually came to the consensus that the sound was not originating from a six-string; it was the stunningly powerful voice of Halestorm frontwoman, Lzzy Hale. (Yes, she “forgot” the “i” in her first name.)

Once Shinedown and myself came to the realization that the sound was coming from Lzzy, Smith remarked to his bandmates, “I know man, they said she can sing her ass off.” No lie. I had a few more questions for Shinedown but I quickly wrapped up the interview while Lzzy was belting out the prelude to “It’s Not You” (presumably the first single from their forthcoming Atlantic Records debut). I dashed out of the backstage dressing room and made my way to the side of the stage to find out what this Halestorm band is all about.

The young foursome from Red Lion, PA captivated the crowd from their opening number and refused to let up for the duration of their hour-long time allotment. The intensity and “grab ’em by the balls and don’t let go” mentality put forth by Halestorm persuaded festival attendees to stick around for their entire set instead of strolling away to sample one of several other bands performing elsewhere on the Summerfest grounds in the same time slot. Halestorm plowed through several songs, never leaving more than a few seconds of silence between tunes.

Towards the end of the set, Hale’s younger brother Arejay (who bears a striking resemblance to the now-forgotten teen sensation, Taylor Hanson) ripped off his shirt and doused himself with a bottle of water. His bandmates cleared out and left him isolated on stage where he banged out one helluva drum solo. This was Rock n’ Roll I was witnessing, folks. Rock n’ Roll with a capital “R” and a capital “R”.

Halestorm went out with a bang, closing their set with a cover of a Led Zeppelin classic, “Black Dog,” before returning to the stage to satisfy the crowd’s request for an encore. It is not too often that non-headliners at festivals are cheered back to the stage for an extra tune, but Halestorm earned it.

By the time Lzzy and company said, “goodnight” to the Summerfest crowd, my over-the-top Rock n’ Roll fix was sated for one more night. Halestorm has some kinks to tweak if they expect to hit the big time, but only the toughest of critics will walk away from a Halestorm performance unimpressed. I was pleasantly surprised to see a band relatively new to the national scene posses such a confident stage presence that can easily fool anyone into believing they are seasoned veterans to the tour circuit. Most people strolling by the stage Halestorm rocked had probably never heard of them before that scorching-hot July day, but knew damn well what they are all about before Halestorm packed up their gear. Straight-up rock with a woman at the helm. Real rock. None of the softball shenanigan ’rock’ nonsense that many female-lead bands try to pass off as the real deal.  Expect big things from this band. Perhaps the next Evanescence with a bigger rock edge? Halestorm recently inked a deal with Atlantic records less than a week before the show and are quite excited about their live EP release coming out in the fall, and a full studio album out in early 2006. 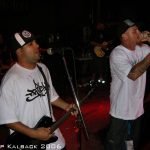