Champions of the Ernie Ball Battle of the Bands, North East Ohio natives Little Wars earned a well deserved spot on the July 23 stop of the Vans Warped Tour. The group, consisting of Joshua Austin, Stephanie Austin, Mike Robinson, and David Call put on an impressive set early in the day, and sat down to chat with us after.

Josh discusses how Little Wars made their way to the Warped Tour stage:

“We won of the spots on the Ernie Ball battle of the bands. They have a little contest every year…We’ve been working our butts off for almost three years now doing the underground and DIY thing. We’re very big believers in the way the internet is right now that it’s very important to be self sufficient as a band and not count on anyone else but yourselves. There’s so much saturation that the only way you’re going to build your fanbase is if you do that groundwork. So we’ve done a lot of that…a lot of house shows and a lot of things like that. Playing a lot of free stuff.”

It’s a real struggle for an independent band to succeed anywhere, but, especially in the greater Akron area. How do they do it?

“Giving away free merch, sometimes online, actually having conversations with people, which I think, as simple of a thing as it seems, people are not excelling in that right now, in my opinion at least,” Stephanie explains. “How many girl bands are there in comparison to male fronted bands that play Warped Tour or things like that. After we played, a group of six, probably 14 to 16 year olds came up and asked for signatures saying ‘that’s so awesome, you never see girls in a band,’ that’s motivation and inspiration. That’s what it’s all about. If you’re not inspiring people and they don’t want to help you, you’re kind of screwed before you start.”

It’s very clique-y. I’m trying to be as unbiased as possible. Being a not-so-skinny girl who is not flashing skin on stage, seems to not be as popular, regardless if you can sing or not. Your talent kind of goes out the window when people start objectifying you and we definitely have gotten flack for years, always, since day one… I don’t know what they want from me but I’m never going to do it.”

Josh: I think in the long run, I think as frustrating as some of those things were when we started, they’ve now prepared us a lot more for the music industry and the way things go. The one thing we started to notice is, the more you get ready to get to that regional level, the more people who were never there, all of a sudden come out of the woodwork…I don’t think if we hadn’t had to struggle so hard to get there, we would have been a lot quicker to talk to those people who never really had our best interests in mind. But this way we’ve been kind of able to stay our course and sustain ourselves and not jump into something we’re going to regret. You hear stories all the time of bands who jump into contracts and they end up regretting it because it hurts their career. It hurts their financials and they sign away copyrights that they didn’t mean to. It’s kind of prepared us to be on our own.’

Little Wars are currently in the studio finishing up a new album. They have big plans and aspirations for the future. Josh discussed the new album’s lyrical content.

“This is a very, very personal album for us,” Josh said. “It’s probably the most personal music that we’ve ever written. We’re delving into the subjects that we were always afraid to talk about because we didn’t know how it would be perceived. There’s no break up songs, there’s no fake angst, we’re talking about the kinds of things that people deal with every day…Anxiety, not being comfortable in their own skin, things that hit us personally that affected our lives that I don’t think enough bands talk about. There’s something big, when Senses Fail came out with their new album, they talk about many similar topics that we’re going to be talking about, and I think that’s a very big moment for the scene. Things like being comfortable with your sexuality. I feel like that even though this music scene is more inclusive as opposed to others, I don’t think a lot of people like to talk about that as far as lyrics go. Bands are like, ‘Oh yeah, we support this,’ but nobody ever really talks about it.”
[divider]
Little Wars on Facebook | Little Wars on Twitter 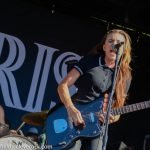 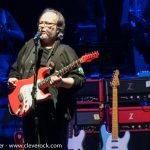