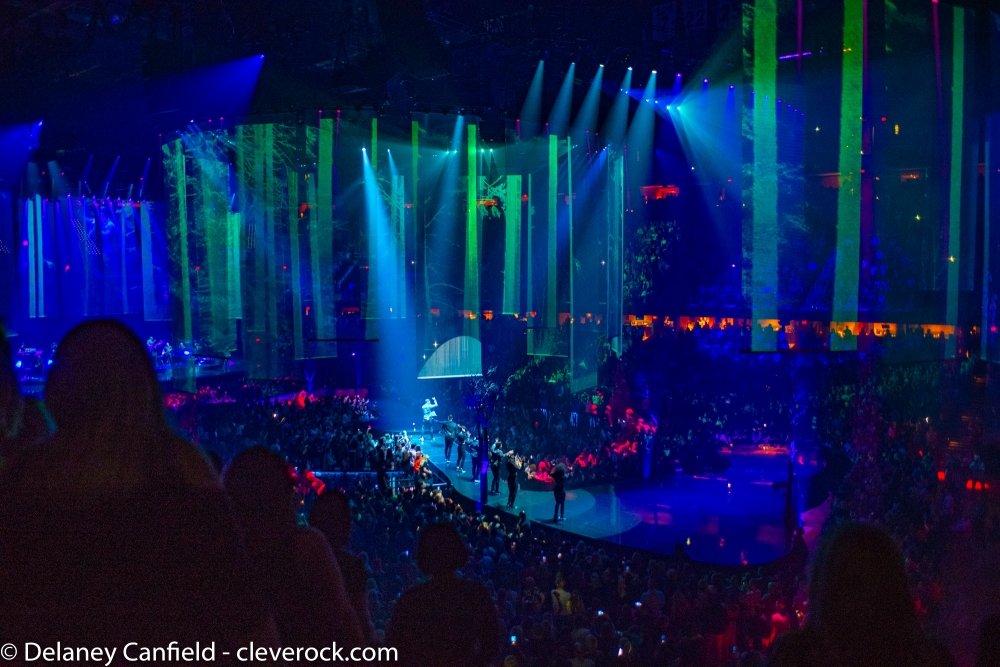 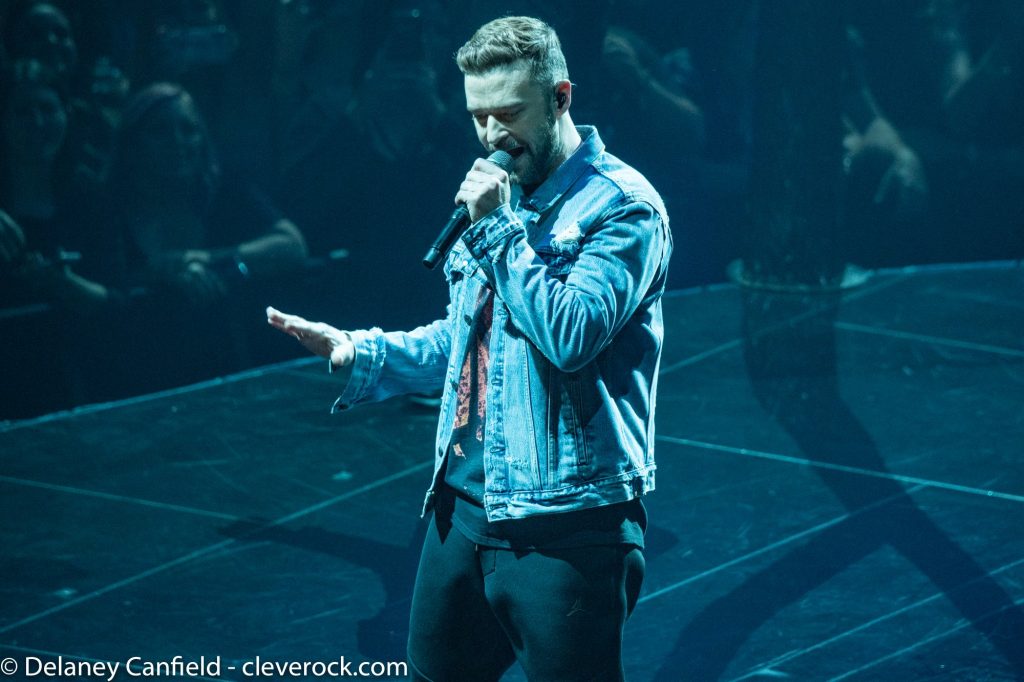 When Grammy award winning artist Justin Timberlake announced he was coming to Cleveland for the second time in 2018, fans were both thrilled…and a little confused? Why another show in Cleveland? I mean, that’s great! But why? Well, to put it simply: BECAUSE HE CAN!

Timberlake is in an elite class of artists that can not only sell out an arena in the same city just six months after being there, but sell it out to an equally (if not more) enthusiastic crowd. After seeing the production of the Man of the Woods Tour, it’s easy to see why.

Justin Timberlake, simply put, is a true performer. He can sing, he sure as hell can dance, and he can play numerous instruments (something we see less and less these in live shows from pop artists). Not only that, but his music spans across generations. He can certainly draw a crowd that will love hearing songs from ‘Justified’ (2002) to his latest album, ‘Man of the Woods’ (2018).

Let’s start with the production, shall we? The stage winds across the entire floor of the arena, with small light up trees pinned along the way to give it a “woodsy” vibe. The winding stage leads to a massive main stage, with two large platforms for each drum kit, and steps the backup singers and horn section stood and danced on. There were also massive mesh-looking screens that raised and lowered behind the main stage and in a circular shape around parts of the catwalk.

Not exciting enough? There was even a small campfire scene complete with log benches for a cute little acoustic moment with Justin and the band (who have been named the Tennessee Kids). It was incredible, to say the least, and everything was part of telling the story of the “Man of the Woods.”

Timberlake entered in style to set-opener, “Filthy.” The shreiks and screams could have drowned out a plane taking off at Hopkins International Airport. No joke.

Timberlake mixed in songs from his entire discography including a mid-set consecutive trio of “Suit & Tie,” “My Love,” and “Cry Me a River.”

What’s a great show without great covers? (OK, LOTS of great shows have no covers, but this great show had some doozies!) In fact, Timberlake busted out not one, not two, not three, BUT FOUR consecutive covers, spanning John Denver to Lauryn Hill. (SEE COMPLETE SETLIST AFTER REVIEW)

As if the production wasn’t mesmerizing enough to watch, why not add a talented band, amazing singer, and great dancing to the mix? The Tennessee Kids added a great energy to the show, interacting with fans and dancing along when they had breaks in songs. Timberlake’s dancers were fun and energetic, so much so that you forget to look where Justin was at times because the dancing was so mesmerizing. Of course, Timberlake’s own dance skills speak for themselves in a seemingly effortless manner. He has, without a doubt, been talked about as one of the best performers of his time, but seeing it live is unlike anything else. One must wonder how someone has the stamina to sing, dance and play music for 2 hours almost every night, but for Justin and the Tennessee Kids, the answer is obvious: pure passion.

The roof nearly fell off the Q on the set closer, “Can’t Stop the Feeling!” Although one might attribute this to the massive renovation project taking place, a more plausible explanation is the

But the best part about the show? Despite being on the road for so long, living what is surely an exhausting lifestyle, Justin and the Tennessee Kids truly look like they’re having fun. Everyone is all smiles, laughing, and seemingly having the time of their life. The music is great, the performing is top-notch, and it’s truly a fun show to watch.

Prior to Justin taking the stage was Francesco Yates, a 23-year-old Toronto native who won over the audience.  It is not easy to please an audience who is there to see one of the greatest performers of modern times, yet Francesco did just that!

In a pre-show interview with CleveRock, Yates revealed that he recently Prince’s former estate, Paisley Park, and he picked up a Prince-inspired ‘cloud ‘guitars. Yates appeared to be showcasing his new purchase onstage this evening.

Francesco zoomed around the stage like he’s been doing it his whole life.  Excited to be performing before the amped-up Cleveland crowd, Yates used every bit of this 30 minute set to show the entire Q Area who he is and what he’s all about.

Let’s be honest, unless Francesco’s parents crossed the border for the show, everyone in attendance came to the show to see JT. But Yates proved to be a valuable added bonus! One way to win over a crowd that is not familiar with one’s original music? Play something they ARE familiar with. The rising star did so early in his set, putting his own twist on the smash Bruno Mars hit, “Finnesse,” and later, “Diamonds & Pearls” by Prince, in a rendition that would have done the late rock star proud.

The audience found Yates to be talented and entertaining. His high energy and upbeat songs were exactly what the audience needed to get them excited and energized for Timberlake’s set.

Set highlights included set opener “Super Bad” as well as his two recent singles, “Do You Think About Me” and “Somebody Like You.” It is well worth noting that all three recordings were written and produced by Yates himself!

“Francesco ended his night with ‘”Sugar,” a song he and Robin Schultz have landed on the Billboard Hot 100.

His confident and commanding stage presence helped win the audience over. Also in our recent interview, when asked about his future goals, Yates replied, “I one day hope to have my own show like Justin Timberlake.”

If he continues to hone his craft, maybe he will! One would be hardpressed to put limitations on this young man.