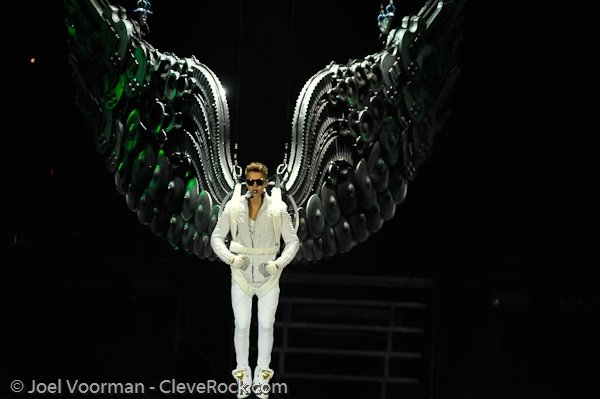 CleveRock.com’s managing editor, Joel Voorman drew the short straw, with none of his big shot staff photographer’s able to shoot Justin Bieber on July 13, 2013 at Quicken Loans Arenas. It’s tough trying to fill the shoes of a “real” photographers, but not as tough as it is to endure the shrieking of 15,000 screaming young ladies in the name of capturing Justin Bieber pics.

NextGEN gallery is not installed/inactive!

After receiving approval to take photos of Justin Bieber‘s ‘Believe Tour’ stop in Cleveland from his publicist about 27 hours before show time, I had a serious debate in my head over if I wanted to seize the opportunity or not. I have to admit, it’s always cool to get up close with a big time celebrity; even ones that make headlines for urinating in a restaurant’s kitchen bucket.

I drove my friend and her excited five-year-old daughter to Cleveland and made sure they made it into the show before making my way to the media entrance to meetup with the other camera slingers.

The confirmation I received from the publicist stated I would be shooting from a designated area in the middle of the floor, which made for a disappointed clan of photographers when we were stationed as far from the stage as possible.

Mr. Machine Gun Kelley made an appearance to catch the Biebs set. When spotted in the audience, he received a louder ovation than the two opening acts (Mike Posner and Hot Chelle Rae) combined.

The screaming became unbearable as Justin made his entrance. I wasn’t impressed with any of the three songs that I saw. When Backstreet Boys and ‘N Sync were kings of the young ladies’ hearts, I never owned any of  their albums, but I’ll shamefully admit I cranked up the volume when they came on the radio. But Justin Bieber? One Direction? Jonas Brothers? All horrible. Not catchy at all.

All in all, capturing Justin Bieber Cleveland concert photos was a worthwhile experience, but one I couldn’t wait to get the hell away from. For a variety of reasons, not the least of which is better quality photos, I will leave the camera in the hands of a professional next time.