Indie rock fans of all ages braced the Cleveland cold on Wednesday evening (01.14.15) for a night of fun and diverse music. After performing in the Tavern (the smaller of the two rooms at the venue) last time through town, Jukebox the Ghost required the larger Ballroom to accommodate their fans this time around.

Jukebox’s setlist was packed with new songs from their self-titled album, released in October of 2014 with indie label Yep Roc Records. Nine songs out of the 18 song set list were off the new album, while the other half were mostly from their first two releases. This blend was a perfect way to please fans both new and old. The whole night, from the opening song “Postcard” off their recent self-titled album to their encore closing rendition of The Bangles’ “Walk Like an Egyptian,” fans were singing and dancing along to the band’s upbeat pop tunes. Even the slower songs and ballads of the night like “Show Me Where It Hurts” and “Undeniable You” (also from the recent self-titled album) still had fans swaying and holding on to every lyric the band sang.

Each member of the trio got a chance to individually showcase their musical talents throughout the night. Singer and piano player Ben Thornewill received loud cheers from the audience when showing off his astonishing vocal range in songs like “Schizophrenia” from the 2010 album ‘Everything Under The Sun’ and “Postcard” from the recent release. Thornewill’s skills, both singing and on the piano combined with the impressive abilities of fellow singer and guitarist Tommy Siegel and drummer Jesse Kristin, who even made a minor singing debut in “Hollywood” (2014), made it clear how the trio has been able to stay together since their start in 2003.

It was clear the band was not making this headlining experience some huge grand event filled with flashy lights and visual effects for every song. Instead, they had a simple backdrop that featured their signature white ghost cartoon, a large stuffed “tour dog” sitting on an amp, and the Beachland’s large disco ball hanging above the audience. They didn’t need anything big and extravagant to make an impression on the audience; just their music.

Opening act Secret Someones had the crowd’s attention from the moment they walked on stage. After all, seeing an all girl band with a guy drummer is definitely not common among touring acts today. The band kept that attention for their entire 30 minute set with their old school rock and roll style sound. Their songs were catchy and fun, but still punk rock and showed these girls (and guy) meant business.

In between Secret Someones and JTG, support act Twin Forks took the rock and roll vibe Secret Someones established and took it south (literally) to a more country folk vibe. Fronted by a familiar face in Chris Carrabba, who at one point led the band Further Seems Forever and headlined several thousand capacity venues performing under the monkier Dashboard Confessional (evening performing for 20k+ fans as the opening act for U2 in 2005), the former teenage heartthrob has traded in Emo anthems for folksie/Americana music, Twin Forks sailed through an upbeat folk tunes set that had everyone in the audience tapping their feet, clapping along and smiling at the cute lyrics. The blend of slow acoustic songs and fast tempo dancing songs their set featured showed the extent of the talents of the members of the band, ranging from beautiful mandolin solos to powerful acoustic guitar parts and even to some use of a tambourine to top it off.

The diversity of the bands throughout the night was a great way to catch the audiences’ attention and expose them to more styles of music than just that of Jukebox the Ghost and added a unique flavor to the evening that most shows don’t have.
[divider] 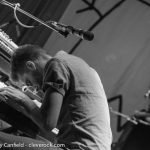 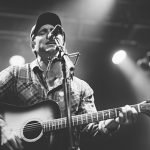