When most bands announce a 25 year anniversary tour it’s because they are looking to go out with a bang before winding down their touring careers. In the case of Hootie and the Blowfish, it was to prove to everyone that they are back, better than ever, and still able to rock out!

While the band has not confirmed the name or release of their upcoming album, fans didn’t need to know any of that to flock to Blossom Music Center on Friday, July 26th to see the band reunite on stage and play their favorite hits. When Darius Rucker, Mark Bryan, Dean Felber Jim Sonefeld took the stage it was as if they had never left.

The band kicked off the night the same way they kicked off their 1994 debut album ‘Cracked Rear View’ with the song “Hannah Jane” and followed it with the upbeat “State Your Peace.” Fans were immediately going wild to see the group reunited on stage, and from that moment on it seemed no one sat down the rest of the night.

Fan favorites of the night included “Let Her Cry” which Rucker belted with power and emotion, “Hold my Hand,” and “Time” which featured nostalgic black and white photos of the band through the years.

Despite having an extensive discography, the band played a handful of covers throughout the night. They performed 54-40’s “I Go Blind,” Radney Foster’s “Fine Line,” the only Led Zepplin song Rucker can sing (according to him) “Hey Hey What Can I Do” as well as a handful of others. They were even joined by local singer-songwriter and producer Don Dixon for an energetic rendition of “Mustang Sally” that had everyone dancing and band members jamming as hard as they could.  When Rucker and Bryan met in college they started off playing music together as a cover band, so these covers perhaps paid tribute to their 1980’s roots.

Of course, Rucker had to pay tribute to his successful country music career (a career perhaps that introduced many fans to his work in Hootie and the Blowfish) by playing “Wagon Wheel” which he released a cover of on one solo album, and his hit song “Alright” from his debut solo album ‘Learn to Live.’ Despite crossing into a different genre, fans were still on their feet singing and dancing to Rucker’s country tunes.

The pre-encore ending of the show was an enthusiastic cover of “With a Little Help From My Friends” which featured opening band Barenaked Ladies. It was the perfect ending, but fans knew there would be more. The band returned for a 3 song encore, of course ending the night with “Only Wanna Be With You” which fans belted out as loud as they could.

Barenaked Ladies were the perfect opening band for this night as they brought endless energy and fun to the stage. The group had fun and silly moments during their set like playing the Big Bang Theory Theme song (which they did write!) and doing a mashup of pop and rap songs “Old Town Road,” “Shallow,” “Sicko Mode,” and “High Hopes.” However, they also showcased that they are incredibly talented musicians as they played songs like “It’s All Be Done”, “Pinch Me” and “Brian Wilson.” The fan-favorite, of course, was their catchy tune “If I had $1,000,000” that had everyone singing and swaying with their friends. 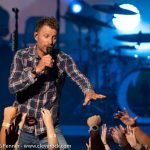 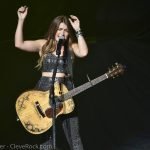