The best of local and regional talent to shine bright at a two day, three stage, 60 act festival…

Get ready, Cleveland! The second annual Heart Riot Summerfest is setting up shop in Lakewood, OH at The Phantasy and The Symposium on August 14 & 15. The two day event will span three stages and feature performances from approximately 60 of Cleveland’s finest talents, along with regional talent coming in from Chicago, Columbus and Detroit.

“I grew up loving hip hop and rock and roll. Heart Riot was started with my love of both in mind. Last year we had our first Heart Riot Summerfest on two stages for one day. We had 20 acts play. 10 Rock and 10 Hip hop. This year we are doing a larger venue, three stages and will have roughly 60 acts playing over a two day period,” Heart Riot CEO & Founder Lance Waste explains.

In addition to leading the charge organizing the festival, Waste’s band, Darling Waste will be co-headlining the festival with Cleveland’s favorite party punksters, One Days Notice. Lance also will perform a solo set.

The release of Darling Waste’s critically acclaimed 2009 album ‘I Am Born’ saw the band nominated for a British Music Week Award & invited to the Brighton Music Awards.

One Days notice, who released their most recent effort, ‘When Dinosaurs Get Drunk’ in 2013, are gearing up for the release of a new record in the near future.  Check out the CleveRock interview with ODN from 2013!

For a detailed list of performers, check out the flier below.

Two day passes for the festival are only $10 if purchased in advance. Door prices increase to $12 per day or $20 for both. Although it is best to support your favorite artist and buy tix directly from them, tickets are also available online, RIGHT HERE! 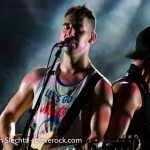 APMAs return to Cleveland in 2015