After collecting a whole slew of passport stops throughout Europe and even Australia, Godsmack is returning Stateside for a two month tour, which stops at Cleveland’s Jacobs Pavilion at Nautica on Tuesday, September 22. The road warriors are still trucking along in support of their 2014 release, ‘1000hp.’

Godsmack have been one of the few consistent forces in rock over the past (nearly) two decades. Their 4x Platinum self-titled debut was released in 1998, and there was to turning back. The band has seen minimal lineup changes over the years, and its current members, Sully Erna (vocals), Robbie Merrill (bass), Tony Rombola (guitar), and Shannon Larkin (drums) have been a constant since 2002.

Robbie Merrill took a break from tour rehearsal day to chat with CleveRock about the band’s upcoming tour, new album, and secrets to success.

‘1000hp’ has arguably the most diverse sound across tracks of any previous Godsmack album.

Merrill said of the recording process:

“We’ve gone through a bunch of different ways of writing. We found from the Oracle and this last record what works well. We all write individually and then we get together as a group and we play as a group and write as a group and we do lyrics as a group. It’s a team. The same thing with the recording. Years past, we usually do the drums first, then the bass, lay down all the tracks. So I’m done in three days or four days and I’m gone. Then Sully is stuck there for four weeks during vocals and doing this and doing that. So to get around that we all did a song a day. Drums will get done, the bass, guitar, and vocals. It seems to work quicker and a little bit more like a team. And I think that you hear that in the writing, it’s a little more diverse. We are all in the room together like we were on the first record.”

In an industry filled with sparkle and fade acts, frequent lineup changes, and more breakups and reunions than a Taylor Swift album, Godsmack has weather the storm and put out six successful records (which have spawned 15 top 5 charting singles) and performed countless shows across the globe.

“We had a business meeting. Our business manager just had a big smile on his face. It’s unheard of. Bands don’t last this long. We weren’t friends but we were all from the same area. We are hard working people, honest people, so you work your ass off for us and then you’re in. I think that has a lot to do with it. It’s our background and growing up and that’s how we are. Once we get our family, we’re tight with that family. You don’t screw up, then you’re in for life.”

“It’s not that we had to beat the first record, we just want to be passionate about what we write about. And as long as you’re passionate about it and honest about it, whether it sells as many records, or sells half, or sells two, all we need is to say in our hearts that it’s the best record that we could do. And we did that as a career, every record we went in passionate about the material and what we were doing and wanted the best for it, and 20 years later we’re still doing it. That’s really, as you know, far and few between people have that opportunity.”

Playing the same hits (ie; “Keep Away” and “Voodoo”) for years and years has to get a little old after a while, no? While Godsmack has continue to release albums at reasonable intervals, playing the classics for months on end, year after year, can take a toll, especially considering how taxing road life is in itself. How does the band maintain their passion, night in and night out?:

“For me, I can only speak for myself, the music moves me. It’s why I got into the band. I liked what we are doing. It’s workout music, it gets you up. And then playing in front of all those people, that gets you up. The songs are fun to play. I’ve been playing the same songs, some of them for 20 years. I don’t think I’ve never not played ‘Keep Away,’ EVER, in 20 years. But you’ve got energy, you’ve got your moods. I think it’s easy because of the kind of music it is.”

In one of the band’s proudest moments, Mayor Martin J Walsh of Boston officially declared August 6 “Godsmack Day.” The band was handed keys to the city. What did this mean to Merrill and company? :

“It was a proud moment. First it was like, ‘what? what are we doing?’ and then it was surreal and the mayor showed up with the keys and we were like ‘wow, this is pretty cool,’ to me, it’s a long time coming. It’s been like, what, 18 years? The mayor knew us and he went to the shows years ago. It was pretty cool, it was a fun day.”

When Godsmack burst on to the scene in 1998, terrestrial radio was king as far as music promotion.  A good deal of households were without an internet connection, and social media and YouTube were but science fiction. According to Robbie, new acts trying to break in have it a little tougher these days:

Godsmack has been documenting their entire career on film, from the band’s inception, to the first album, through present day. It has been long rumored that this footage will be released in the not so distant future. Any truth to this, Robbie? :

“We shoot every day. We just shot a little mini-movie. It’s basically a little skit we are doing for the opening of our new show. Whether or not we can pull it off…it’s more of an arena type thing. We have years and years and years of footage and we’re getting around to it. We’ve put out some stuff here and there. You know, it has to be like the timing has to be right for us to do it the way we want to do it. You don’t want to put out something half ass.” 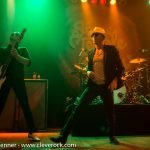 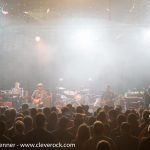