While the calendar may not officially turn to summer for another two weeks, the season is in full sizzle for the concert biz. That means destination festivals galore, Country Mega Ticket and, of course, since Everclear launched their Summerland Tour in 2012, no summer is complete without 90’s package tours.

Having performed with the original Summerland trek, followed by Sugar Ray’s Under the Sun package in 2013, Gin Blossoms are no stranger to bringing 90’s nostalgia to mid-level clubs across the country. The Tempe, Arizona natives are about to hit the road with two of their contemporaries, Tonic, alongside three-hit-wonder Vertical Horizon. The tour stops here in North East Ohio on Thursday, June 15 at the Hard Rock Rocksino in Northfield. [Complete show and ticket details: RIGHT HERE!]

Gin Blossoms reigned supreme on the radio charts from 1993 through 1996 with six consecutive top 10 hits combined from their records ‘New Miserable Experience’ (certified 4x platinum) and ‘Congratulations… I’m Sorry.’ The hits included “Hey Jealousy” (still a radio staple in 2018), “Until I Fall Away,” the No. 1 hit, “Found Out About You,” Empire Records’ Soundtrack spawned “Til I Hear It From you,” and “Follow You Down.”

All of the success came following the death of these songs’ principal writer, Doug Hopkins, who committed suicide in 1993. Gin Blossoms managed to soldier on, playing to capacity crowds and their music taking residence on Casey Kasem’s weekly countdown. Turmoil proved too much for Gin Blossoms, and the group went silent from 1997 until reuniting in 2002.

In a recent phone interview with CleveRock.com, Gin Blossoms’ frontman Robin Wilson simplified the reasons behind the band’s success.

“It is timeless. The reason is that the songs are good.  It always comes down to that,” he said.

“Why does any group succeed?” Wilson asked himself.

“We all have good songs,” he answered.

Having already revealed I am in my mid-30’s and enjoy nothing more than a trip down memory lane with some mid-90’s music, I pressed Wilson about what made music from that era so successful.

“There’s a nostalgia factor that’s really important, but the main reason these groups were successful is that they all have good songs,” he reiterated.

Delving a little deeper. Wilson was asked about the group’s recent 25th-anniversary tour of ‘New Miserable Experience.’ The record holds a special place in this interviewer’s heart. One Christmas Eve I unwrapped my first compact disc boombox, which was accompanied by the CD! I couldn’t wait to play the hell out of “Hey Jealousy”; perhaps listen to the rest of the record sometime in January.

Did the Gin Blossoms frontman have any idea when the recording sessions wrapped in 1992 that the band had composed a record that would go on to sell millions of copies and be strong enough to support a tour 25 years later?

“We knew that we had done something special. There’s no way to predict that sort of thing. All of our heroes were bands like The Replacements. We never envisioned more commercial success than The Replacements,” he said. “I’m even now surprised to find out how many more records the Gin Blossoms have sold than The Smithereens. I stand upon the shoulders of giants. It’s always strange to think about it in terms of your commercial success.”

The 25th-anniversary tour of ‘New Miserable Experience’ proved to be a trip for Wilson and his bandmates.

“Relearning that record from beginning to end gave me a new sense of perspective of its level of quality. I hadn’t listened to the whole album in 20 years. To go through it again as a body of work, it’s really damn good,” he said proudly.

Wilson talked about two of his favorite records, ‘Candy-O’ by The Cars and ‘The Game’ by Queen. While not drawing parallels to the historical status or overall musical greatness of those two records, he could not help but look at them from a standpoint of commercial success.

“To look back and sort of realize that we can sort of compare to that is sort of astounding, humbling, and gratifying,” he reflected. “It’s a miracle of chaos and mathematics in the future that our band is still together. We have an audience that wants to come and see us and it’s all very, very humbling.”

As far as package tours and album anniversary treks…

The day after their show in North East Ohio, Gin Blossoms are scheduled to release their sixth studio album, ‘Mixed Reality’  (available for pre-order: RIGHT HERE!), the group’s first studio album since 2010’s ‘No Chocolate Cake.’

“You will be hearing at least four, if not as many as six new songs at the show,” Wilson promised.

The new album was recorded with famed producers Don Dixon and Mitch Easter. The tandem co-produced two of R.E.M’s earlier records and have separately been involved in dozens of notable records.

“I got a message telling me Don Dixon was coming out to one of our shows,” Wilson recalls. (According to Wikipedia, the show took place in Ohio.) “After the show, on the bus, I was really excited to meet him. I’ve been such a huge fan of his recordings…Albums that are really key to my upbringing as a songwriter and performer including Marshall Crenshaw, The Smithereens, R.E.M.; those are all really important records to me.”

So how does ‘Mixed Reality’ stack up against longtime fans know and love?

“We don’t really overthink those kinds of things. We do what comes naturally to us. But I would say that, actually, on this record, we did come up with something that really is true to our early music,” he continued. “I feel like I was able to hack into a younger version of myself when writing these songs. I feel like I came up with music that we would have been very excited to play between 88 and 95. Any one of these songs would have been well received.”

Wilson doesn’t sound like he’s bullshitting. He thinks Gin Blossoms are returning true to form. I could hear the sincerity in his voice.

“There’s definitely one song that feels a lot like an R.E.M. sort of song with early Gin Blossoms lyrics. There’s also a song that’s the dirtiest thing I’ve ever written. It’s called ‘The Devil’s Daughter.’ I know for a fact that we would have been really excited to play that song in 1989. It does sort of remind me of some of the things that we used to do in those days,” Wilson explained. “I was thinking of Doug Hopkins, too, our original guitar player. I didn’t go out of my way to write something that Doug wanted to play, but he’s definitely in my thoughts and I do feel like I wrote some songs that even Doug would have been pretty excited to play.”

While Gin Blossoms will always be the center of who Wilson is as a musician, another exciting opportunity has presented itself to him, one that he was incredibly eager to discuss. My ADD ass zoned out a bit during the interview and I didn’t think I heard Robin correctly when he said, “I’m doing shows as the lead singer of The Smithereens.”

After an awkward pause, I said, “Wait. What?”

Sensing my lack of attention, Wilson laughed and reiterated, “I’m going to repeat that, I’m doing shows as the lead singer of The Smithereens.”

Maybe it wasn’t for my benefit? Perhaps Wilson just likes the sound of hearing himself say it aloud.

Following the death of frontman Pat DiNizio, the remaining members of The Smithereens held a tribute show in New Jersey this past January. Wilson was invited to perform with the guys

“I was invited to come in and do a couple of songs. At rehearsal, they asked if I wanted to do three, and I was like, ‘Damn right!’ Then we’re getting ready for the show and they were like, ‘do you want to do Blood and Roses, too?’ I was like, ‘HELL YEAH!'” Wilson recalls. “I ended up doing four songs with them at the tribute show and we all hit it off and I told them that I would love to do more shows. That’s happening! We just played outside Chicago a couple of weeks ago. You can find some videos of me fronting them on YouTube. It’s really incredible,” he continued.

“We’re going to attempt to maybe do a few shows with Gin Blossoms and Smithereens, but we can’t do too many because it would be exhausting, even then, it’s still less singing then Bono or Springsteen typically do in a show,“ Wilson admits.

“If I could go back in time and tell my 20-year-old self that one day we would have an album by Don Dixon and I would be singing in the Smithereens, there is no way that kid wouldn’t lose his fucking mind,” Wilson said excitedly. “It’s just a real thrill and a full circle validation of the path that I’ve followed as a musician.” 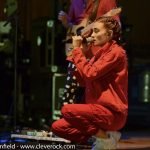