When the Genitorturers come to Lakewood, OH last night (10.07.15), perverts from all over Ohio come out and gathered to witness firsthand what can only be described as a kinky carnival set to music. Gen Vincent has fronted the band for 20 years, never giving up her reign as the fetish queen of metal. Gen was never shy and has orchestrated many thrilling stage shows over the years. You never know what you might get when you go to a Genitorturers show- the only guarantee is that it will be provocative and never the same show twice. When the Genitorturers hit the stage at The Phantasy there was no doubt that the legendary debaucherywas just getting started.

The band opened the set with “Revolution” from their most recent album ‘Blackheart Revolution’ as Gen took the stage- a corseted firecracker, trademark platinum blonde hair and a voice that could growl and whisper in the same song. A platform housed a giant cross and as Gen began “Cum Junkie,” Gen writhed in front of the cross and brandished a bloody sword which she firmly planted into the stage. The Genitorturers always travel with stage performers who join Gen onstage, providing asses to smack and keeping the live show going strong. This tour was no different, with costumes for the performers changing with almost every song. Almost as entertaining to watch was guitarist Eric Griffin whose bombastic stage presence seemed to grow stronger with each song.

Crowd favorite “Devil in a Bottle” saw the Devil slink onstage only to be covered in Jack Danielsand shamelessly taunted. “Hail to the Freaks,” a Genitorturers classic from ‘Sin City,’ hit the crowd like lightning as Gen emerged in a top hat and red tailcoat as she roused the crowd with her carnival barking cane. Gen consistently interacted with the crowd- pulling some onstage, placing masks on others and hitting them with her “pussy spanker”- a wheel turned by a crank with leather slappers attached.

Never one to shy away from the perverse, Gen emerged wearing a strap on as the band launched into the title track off of their album ‘Sin City’ and the crowd ate every second of it up like kids in a candy store. The show rolled on as dancers’ shot sparks from their nether regions and Gen emerging in a metal chest piece adorned with long creepy tubes for the song “One Who Feeds.” By the end of the show, the enraptured crowd was both sweaty and aroused. 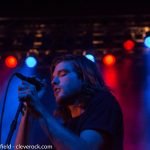