Intrigue. Pulsing excitement. Curiosity. A pinch of skepticism. That was this writer’s initial reaction to the Game of Thrones Live Concert Experience tour, which made its way to Nationwide Arena in Columbus, OH last night (02.23.17).

Intrigue: What in the heck was this show going to be? All I knew about the show when it was initially announced is that composer Ramin Djawadi’s (who does the score for the hit HBO television series, whose previous credits include the Grammy® nominated score for Marvel’s 2008 blockbuster, Iron Man, alng with ABCs Flash Forward and Fox’s Prison Break) would be performed by a full choir and orchestra. (Naturally, this responsible journalist did his homework and found out what else to expect at the show!)

Pulsing excitement: Game of Throne is hands down this reviewer’s favorite current television series. Perhaps tied for all-time favorite with the AMC show Breaking Bad. As a consumer of live entertainment, no matter this event would entail, I was super excited to have the opportunity to attend!

Curiosity: Right in line with my intrigue. What else besides the music would keep an audience captivated for a lengthy live performance?

A pinch of skepticism: Welp, I cannot lie. I have been disappointed by similar concepts before. Specifically, some Cirque du Soleil shows didn’t come close to living up to the hype; don’t even get me started on Toy Story 3 on Ice!

All that being said, this reviewer was excited during the two hour+ drive from Cleveland to Columbus for the show. And, not only I was I not disappointed, I was blown away.

In a press release prior to the star of the tour,  Game of Thrones creators/executive producers David Benioff and D.B. Weiss said, “The GoT Concert Experience will be unique in the history of concert tours, an eye-popping, ear-splitting, phantasmagoric blend of the show’s visuals and Ramin’s powerful compositions. We are more excited for it than anyone.”

After a 40 minute delay from the scheduled start time,

As they should be. Live Nation and HBO put this show together seemingly with the philosophy that money is no object. No expense was spared for this elaborate production.

One of the biggest advantages to seeing this production was seeing scenes from the show come to life on enormous screens that trump my 39″ television (seemingly ten-fold). Bigger is always better (talking about screen size here!)

This spectacular show accomplished the impossible: provided me with a greater appreciation for my already-favorite-show. My excitement for the seventh season is boiling. 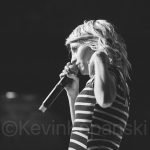