O.A.R.’s sax-man extraordinaire, Jerry DePizzo, and solo-artist/Everfine performer, Jon McLaughlin introduced the first performance of the afternoon, a special acoustic duo of O.A.R. frontman, Marc Roberge with Everfine veteran, Matt Nathanson. I listened to the rehearsal earlier in the afternoon while conducting interviews backstage. I thought there was no way in hell these guys could pull this off, based on what I heard just hours prior.

In fact, this was the highlight of the festival.

Prior to the performance, Nathanson warned, “This is going to be really fucking funny, so keep drinking.”

Roberge looked a tad uncomfortable on more than one occasion during Nathanson’s explicit ramblings. The setlist was highlighted by a rendition of Paul Simon’s “The Obvious Child” and a beautiful cover of Crowded House’s, “Fall At Your Feet.”

After a brief set break, Singer/Songwriter Jon McLaughlin took the stage and tickled out a few tunes on the keys. McLaughlin certainly did not exceed the expectations that are generally attached to the first band in a lineup of six. His performance wasn’t bad; not memorable, either. In all fairness though, the Roberge/Nathanson duo is a tough act to follow.

In a pre-show interview, DePizzo told me that any one of the bands playing at the festival could really breakthrough this year, in the same way Maroon 5 broke out after their appearance at the inaugural FBTE. My money isn’t McLaughlin.

Keeping with the piano theme, alt. rockers from Minneapolis, Dropping Daylight inserted the first energy surge into the day. I’ve always been a sucker for piano rockers, especially when they’ve got a kick-ass stage performance, which Dropping Daylight definitely does. The band’s set drew heavily from their Octone Records debut, ‘Brace Yourself’. Their music deviates significantly from the FBTE mold, but their ‘grab em’ and don’t let go’ style prompted the return of folks that strolled off to grab a beer and peruse the merch booth during McLaughlin’s set. Dropping Daylight were well received and will be one of the better draws this summer when they embark on Warped Tour.

Next up, Bedouin Soundclash. Reggae band fronted by a white guy (strike 1), Canadian (strike 2), Reggae version of a U2 song (strike 3). Go home. Nobody likes you.

Nobody expected this year’s Everfine to produce another Maroon 5 ,or Marc Broussard. Expectations met.

“Cleveland, Ohio: you sexy bitches,” Nathanson greeted the crowd as he strolled on the mainstage. His second-to-none wit adds an entirely new entertainment element to his show (and the festival as a whole).

Nathanson opened his set with “Lucky Boy,” which segued into a cover of Cheap Trick’s “I Want You To Want Me.” In addition to playing songs plucked from his five indie albums and his 2004 Universal release, ‘Beneath These Fireworks,’

Matt cleverly inserted a few intro/outro covers, including Rick Springfield’s “Jesse’s girl,” which he described as, “…a very sad song, it’s about a very rich rock and roll star that couldn’t bang his best friend’s lady, and that’s just tragic.”

Nearing the end of his set, Nathanson announced, “I’d like to bring out my boyfriend” as Roberge stepped up to a mic and joined Nathanson for “Angel” and “I saw” (arguably his two best tunes). Before Matt brought the show to an end with “Amazing Again”- – >“Losing My Religion” (R.E.M) and “Answering Machine,” he got his biggest laugh of the night after he received a one-finger salute from someone in the crowd.

Matt snapped, “Hahaha! You’re like, 16 years old. What are you doing? Are your parents mad that you’re flipping off people? You’re 20 my ass! You don’t have a pubic hair on your body. What are you doing flipping me off? You’re like,14, Dude! You drink cough syrup to get drunk. Are you kidding? Go home! Your mom’s tit needs your mouth”

Hs set ended with Matt and a few thousand of his friends singing along to “Answering Machine”:

Sadly, Nathanson is one of those musicians that will never get the recognition and exposure he deserves. Much is said about his wit and charismatic personality, but even more impressive are his voice, impressive range, and the ability to conquer the incredibly difficult test of harmonizing with Roberge. His goof-off demeanor on stage is countered by lyrics that are clearly personal. Matt isn’t ashamed of having a sensitive side or wearing his heart on his sleeve. Bottom line, Matt’s material is too sensitive for the rockers, and not wimpy enough for the EMO crowd.

After a seemingly endless chant of “O-A-R”, the gents strolled to the stage, in a not-at-all dramatic fashion (seeing as how all of the guys had either been on stage or spotted wandering amongst the crowd earlier in the day). When DePizzo was seen holding a guitar instead of his saxophone, it all but nullified any element of surprise that they were going to open with “Love and Memories,” the first single off their new album, ‘Stories of A Stranger.’

Despite murmurs of O.A.R. ‘selling out’ and offering up watered-down, radio-friendly tunes, there wasn’t a soul under the giant tin roof not screaming the lyrics. Surprisingly, L&M really makes a nice enough translation to the live version that the long-time fans don’t have much to complain about.

The rhythm section of Benj Gershman (bass) and Chris Culos (drums) took the spotlight for “Dareh Meyod.” I’ve seen O.A.R. roughly a dozen times and this was the best performance of the song I have seen. However, it took a backseat to people knocking each other over, aggressive elbow throwers, and overweight crowd surfers using innocent bystanders to pad their falls. In the middle of the next number, “Nightshift,” )one of the most fun tunes in the band’s catalogue), it was Roberge’s turn to snap:

If everyone took that message to heart, we would have seen a mass exodus towards the gates, and the headcount would have been cut in half. I don’t remember how or when the O.A.R. crowd became littered with aggressive moshers. I saw them last summer in Milwaukee and was vomited on twice, took some hard shoves from card-carrying members of Future Frat Boys of America, and had to pick myself up off of the ground, all of this 15 minutes before the band even took the stage! I’m glad my desire to get as close to the stage as humanly possible (even if that meant going home with a few battle scars), subsided years ago.

The fighting simmered briefly during a cover of Simon and Garfunkel’s “The 59th Street Bridge Song (Feelin’ Groovy),” but quickly resumed during “City on Down,” one of the band’s best songs musically and lyrically, and takes the crown for O.A.R’s best performance of the night.

The rest of the band’s main set featured “Heard The World” and “One Shot” for the new fans; “Mr. Moon” and “Black Rock” for the faithful; “Hey Girl” and “Crazy Game of Poker” for all.

The encore started with a cover of Led Zeppelin’s “Fool in the Rain,” and the night ended with a Superjam where a parade of performers from earlier in the day teamed up to completely butcher R.E.M.’s “It’s the End of the World As We Know it.”

This has become an Everfine tradition: Everyone coming together to play a tune that is completely unrehearsed. It’s a great way to end the night. Nathanson took the lead on vocals, and everyone else just chimed in where they felt appropriate.

All in all, despite having a crowd littered with too many people that have no respect for others, this goes down as the best Everfine thus far. O.A.R. put on their most lively performance in recent memory, Nathanson and Dropping Daylight were sensational as always, and the other bands, well…while they failed to WOW anybody, they put on some decent shows as well. Great turn out this year and it had more of a ‘real’ festival vibe this year, closer to, albeit incomparable from a Bonnaroo/Summerfest/Bumbershoot feel opposed to a regular show on the Tower City Amphitheater calendar. Keep your fingers crossed we’ll see the festival return in 2007! 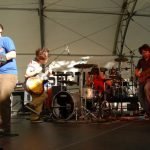