North East Ohio based Elevation Group has planted their flag not only in the greater Cleveland / Akron area, but around the globe. Formed in 2002 by former IMG senior executives Steve Lindecke and Denny Young (the latter who also worked at former Midwest concert promoter powerhouse, Belkin Productions), Elevation Group’s accolades range from a NASCAR Sprint Cup Championship to an Emmy Award for their work on PBS mini-series, ‘The Music of Ireland.’  2016 is shaping up to be the company’s most impressive year yet, with recent venue openings in the area and the debut of North East Ohio’s premier music festival, LaureLive, on the horizon.

Elevation Group recently partnered with Industrial Realty Group to refurbish a near-century-old complex at the former Goodyear headquarters, located in the revitalized East End area of Akron. The two companies worked together to reopen them as two separate venues, Goodyear Theater and Goodyear Hall, with capacities of approximately 1,500 and 3,500, respectively.

In a recent phone interview, Elevation Group president Denny Young explained, “It’s a much more broad development. They [IRG] saw when they acquired that space from Goodyear that there was a 1920’s theater and hall. They felt that they were viable spaces to be renovated to produce concerts and events,” he said. “Really, we did not go seeking out these venues, it was just an opportunity. We thought they looked terrific and that with the right care and renovation, they could be incredible.”

The Goodyear projects are not the only venues that Elevation Group has cooking. They have also partnered with Crop restaurant and will be launching a new venue similar to Music Box Supper Club called On Air Studio, a 400-capacity, state of the art concert hall located in the Flats East Bank. The venue will book national touring acts.

Elevation Group has been promoting a concert series at Trinity Cathedral in Cleveland, including recent performances by Blind Boys of Alabama and Sandra Bernhard. This concert series, somewhat accidentally, spawned the idea for LaureLive.

Young explains, “There was a woman that is a board member at Laurel School, a private, independent girls school. She contacted me and she said that they were interested in doing summer shows at our Butler Campus at their pavilion and, maybe they could be the summer home of Cathedral concerts,” he said. “I went out there and the pavilion, I felt, was really too small to host the kind of shows we are doing at Trinity, but they had 140 acres of green space and wooded land. I told them that if they really want to put their flag in the ground for music and education and really fostering participation and enthusiasm amongst young kids, we could look into building a multi-day, multi-stage, multi-act music festival. That’s how LaureLive was born.”

Elevation Group’s goal is not to grow LaureLive into a gigantic destination festival like Bonnaroo or Lollapalooza, but certainly hopes to become the area’s premier music festival.

But why stop at venues, concert series and festival? Elevation Group also has their hand in the artist management jar. They work with Cobi, who is currently involved in a worldwide tour, and North East Ohio’s own Red Sun Rising. While fans in the greater Akron / Cleveland markets have long been familiar with RSR’s talents, they have recently made a huge splash on tours with established acts including Pop Evil and Godsmack. RSR has also been busy breaking records for radio airplay for the first two singles from their Razor & Tie debut, ‘Polyester Zeal.’

“They were awarded with their second #1 single, the song is called ‘Emotionless,’ the first song was called ‘The Other Side,” Young stated. “‘Emotionless’ became the second #1 single for Red Sun Rising. They are the first independent band in the history of Mediabase, which is a radio rating system, to have two #1 songs off of their debut album. It’s an amazing story, actually.”

Having experienced a great deal of growth over the course of the past few years, Elevation Group plans to keep building on their success.

“I want to work with the right people. I wouldn’t put a limit on anything. I wouldn’t put a limit on concert venues, music festivals, or artists. If they are good projects and we can be in business with interesting people that can help us be better and bigger, we are going to pursue those opportunities, for sure,” Young stated. “We want to push the envelope, we want to be the best we can be and put ourselves in a really good position to succeed. We want to do things that we enjoy, so much of what we do is music based, motor sports based and event based, and all of the people that work here, that’s what they like to do.”

Whether it is running a concert series, creating a music festival, managing bands, opening and operating new and exciting concert venues, the goal for Elevation Group is simple: “We are committed to bringing music, bands, and entertainment to North East Ohio that otherwise might not come here. We are going to be a really great option for live music,” Young said. “We are going to work our rear ends off to be a contributor to the music scene in North Eastern Ohio.” 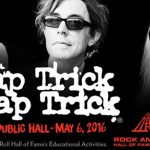