Punk rock, more or less, has always been a pulpit for adolescent frustration. With youth, naturally, comes discontent – you’re broke, you can’t get laid and you rely on alcohol and drugs to soften the anxiety inherent of the “real world.”

That being said, two of the best up-and-coming acts in punk right now, Chicago’s The Orwells and L.A.’s FIDLAR, brought their own personal brands of youthful disdain to the Grog Shop Tuesday night. Both groups’ blazing live sets speak to this writer’s aforementioned notion that punk is best done by the young, angry and reckless.

The Orwells took to the stage first. The group, whose members ages range from 18-20, was more than ready to blow away their rapidly expanding, mostly underage fan-base in attendance at the Grog. The band opened with “Mallrats (La La La),” off their 2012 debut, ‘Remember When.’ The album title proves rather apropos – The Orwells sound takes you back to the slack, fuzzy garage rock of yester-year that, so long as there are pissed-off kids around (which, you guessed it, there always will be), will never go out of fashion. “Mallrats (La La La)” got the crowd energy pulsing right out of the gate. Supported by assaulting dissonant guitars, courtesy of guitarists Dominic Corso and Matt O’ Keefe, frontman Mario Cuomo disaffectedly wailed away on the mic. Provocative is, undoubtedly, a fitting title to bestow upon Cuomo. The singer staggered around stage (while rolling his eyes back into his head), frequently engaging the crowd positioned front-and-center. The kid knows how to work his fans.

The ‘60’s dancehall swing of the band’s “Halloween All Year” featured a clever medley of The Foundations’ “Build Me Up Buttercup.” Also, ‘Remember When’ highlight “In My Bed” served as the perfect encapsulation of jaded teenage romance and dejection (so the unexpected romantic advances of a female crowd member certainly served as a personal paradox to me). The band concluded with a raucous cover of The Stooges classic, “Now I Wanna Be Your Dog.” At this point in the show, the shirtless, intoxicated Cuomo hurled himself into the crowd one final time – a fitting way to end what was an exuberant set from the rising Chicago quintet.

Headlining the bill, FIDLAR (in case you were wondering, that’s an acronym for “F*** It Dog, Life’s a Risk”) had a tough show to follow, in terms of crowd energy, after The Orwells concluded. But they were clearly up to the task.

FIDLAR specializes in scuzzy, short bursts of garage-surf that, lyrically, touch upon cornerstone Cali-punk motifs such as getting wasted and surfing. Fronted by bombastic guitar players and vocalists Zac Carper and Elvis Kuehn, the group began the night with the opener from their self-titled debut LP, “Cheap Beer.” The anthemic track, which got the crowd thrashing immediately, features a brutally simple yet dynamic chorus: “I drink/Cheap beer/So what/F*** you.” The set mostly consisted of numbers off ‘FIDLAR.’ Album highlights such as “Max Can’t Surf” (about the group’s “ginger” drummer who’s “got no balance,” Max Kuehn) and “Blackout Stout” were delivered with full-force. Another high point of the night came during the band’s epic 2013 summer single, “Awkward.”

However, the two best moments of FIDLAR’s set came during the final two songs. First, album-closer “Cocaine” got the crowd so frenzied that a stage rush forced the band to start the song over. When they finally got to play (semi) uninterrupted, the track kept the whole crowd at the Grog oscillating. After departing the stage momentarily, calls for an encore got the quartet out for one obligatory curtain call: a marvelous cover of Blink-182’s “Dammit.”

Overall, The Orwells and FIDLAR not only showcased their deft ability to craft succinct, punchy punk rock numbers, but also evidenced why they are two groups at the forefront of contemporary punk music. Are these ideas the most original? Are they pushing the vanguards of music? No. But punk has never been about game-changing or radical reinvention. It’s about giving the people what they want: back-to-basics rock ‘n’ roll about being young and having a damn good time. They may not be young forever, but The Orwells and FIDLAR understand that for the time being, why not make some music and have a little fun? 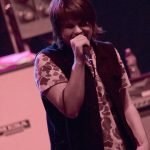