Cloakroom will soon play for their largest live audiences ever. The trio will be opening a string of dates for Brand New, including a show at Jacobs Pavilion at Nautica on Thursday, July 2!

Ahead of the show, frontman Doyle Martin phoned CleveRock’s hotline to discuss his band’s new album, ‘Further Out’ and preparing for their largest capacity shows yet.

Formerly having fronted the bands Grown Ups and Lion of the North, after those groups disbanded, joining up with a new project just seemed natural for Martin:

“That’s what you do if you play music. You play music in high school and freshman year in college. Lion of the North did a little bit of touring. Grown Ups got to go to Europe and tour the US a couple of times. It was fun. I want to keep playing. I didn’t know what else to do except start a new band.”

Martin doesn’t really know how to describe Cloakroom’s sound, but noted that most would describe them as “shoegazey” or “post-rock,” all the while laughing at how many niche genre classifications are now floating around.

Doyle also isn’t sure how well his music will be received by Brand New fans, who may be unfamiliar with Cloakroom, but he seems modestly optimistic:

“I guess it’s not up to me, is it? I’ve listened to Brand New throughout the years and it feels like they always evolving and changing. Their fans really keep up with them so it seems like their fans are super dedicated to them. Whatever they do, it means that they are open minded to a lot of different aspects of rock and roll or musical variants on the genre, so hopefully they will like one or two of our songs. We play 30-35 minutes. Not too long; not too short. I’m sure some people will be bummed out, but if you can touch one person, you know?”

The best part about playing these shows for Doyle?:

“I’m looking forward to playing on a nice PA system. Put my amp on a nice PA and it will sound real damn good. “

‘Further Out,’ Cloakroom’s debut album for Run For Cover Records is a great first effort. Doyle credits much of that to their awesome recording in a small town with nothing to do but booze, scarf pizza, and record.

“We recorded with Matt Talbot. He played in this band called Hum. I’m not sure if you’re familiar with Hum, but that’s definitely where the term space rock was thrown around. A little teeny, teeny town of Tolono, Illinois. The only thing you do there is record. It’s the only thing to do besides a pizza place and a bar.”

Martin also had big time praise for his new label:

After a busy start to 2015 with a new album to promote and some shows with Brand New, Cloakroom is anxious to record yet even more music at their favorite studio:

“We’re going to go back to the studio at the end of August or early September and record a couple of songs. We’re going back to Earth Analog. I’m not sure where else we would go because that place is fucking awesome. It’s like an adult version of Discovery Zone.” 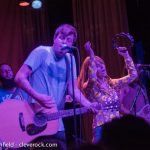 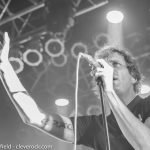