The opening line of Chvrches’ Wikipedia page describes them as a “Scottish electronic band” which, to be very blunt, sounds really weird. Scottish and electronic do not sound like two things that would mix well, but strangely Chvrches managed to make it mix so perfectly allowing them to find success rapidly despite only forming in 2011.

After seeing the group perform Wednesday night (10.9.15) it was clear why the group managed to be so successful. The group’s new album ‘Every Open Eye’ doesn’t stray too far from their first album ‘The Bones of What You Believe’ (2013), but why mess with a good thing, right? Their upbeat electronic synthpop songs were a hit the first time around and certainly loved the same, if not more the second time around. Fans belted all the words to every song and danced their hearts out from beginning to end of the set.

The band came out clad in their usual all black attire with lead singer Lauren Mayberry rocking her notorious eye jewels. With three brightly lit screens behind them and lots of strobe lights, the flashing lights and sporadic projections created the exact mood you would imagine a Chvrches concert having when you listen to their music at home.

Notable songs from the evening included the band’s single “Gun” (2013), the very intense and mysterious song “Science/Vision” that really got fans going. Additionally, “Empty Threat” and “Never Ending Circles” both off ‘Every Open Eye’ had fans screaming along to every word. Mayberry’s vocals were so incredibly strong and beautiful that one might have questioned lip syncing with how similar she sounded to the album if it wasn’t known among fans that she’s actually just that good.

To add even more fun to the night, it happened to be Mayberry’s 28th birthday as well, so fans joined in singing her “happy birthday” to celebrate. She thanked the crowd repeatedly, not just after that but throughout the night, for their immense love and for giving her the chance to do what she loves alongside Iain Cook and Martin Doherty. A
lthough the group is young, they have immense talent and chemistry on stage and know how to get an audience on their feet and smiling all night long. It will definitely be exciting to see where their careers go in the coming years.

Chvrches brought along Sydney, Australia natives Mansionair to open up the night. Their alternative electronic music was quite different than Chvrches’ but still resonated well with the audience. Their electronic elements were less prominent than the loud beats Chvrches used, but the addition of guitar, drums and keyboard gave their sound a different and unique feel that got the audience ready to go crazy for Chrvches. 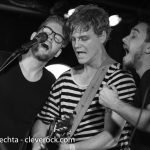