If one were to envisage a Mount Rushmore of indie rock supremacy, right next to, say, Pavement and Dinosaur Jr., one could make a very strong case for the inclusion of Built to Spill. Fronted by face-melting axe man and vocalist Doug Martsch, the iconic Boise five-piece have carved out a 20-year career of consistently stellar music, releasing some of the seminal LPs of the 1990s (see 1994’s ‘There’s Nothing Wrong with Love’ or 1997’s ‘Perfect from Now On’ for evidence of this notion).

However, Built to Spill have scarcely rested upon their already affirmed legacy. Since the release of the group’s latest studio effort ‘There Is No Enemy’ in 2009, they have been touring consistently, with a promise of new music on the horizon. Their show this past Tuesday, Nov. 12 at the Grog Shop, was a routinely superb exercise in musicality by a band renowned for its exceptional live show.

Opening for Martsch and Co. were Wet Hair and Slam Dunk. I didn’t make it in time to catch Wet Hair (it’s stunning how alcohol consumption makes you lose track of time), but Slam Dunk certainly proved an apropos moniker for the dynamic four-piece, who hail from British Columbia, Canada. The band conveys sonic influences that run the gamut from Modest Mouse (a self-avowed Built to Spill disciple) to the E Street Band (if the E Street Band possessed the manic, punk bombast of a group such as Fucked Up).

For Slam Dunk’s live act, frantic fuzzed-out guitars and crashing drums cast the perfectly unhinged yet melodically appeasing backdrops for the band’s exhilarating half-sung, half-shouted numbers (on which bassist Caitlin Gallupe and guitarists Jordan Minkoff and Duncan McConnell all exchange vocal duties). They furiously ripped through tracks off their latest LP, ‘Welcome to Miami,’ such as “Sass” and “Can’t Stand It.” On their new song “Jim,” Martsch and fellow Built to Spill guitarist Brett Netson joined Slam Dunk for a particularly raucous rendition.

Built to Spill’s headlining set was ripe with classic cuts from the band’s catalogue. Opening with “Made-Up Dreams” and “The Plan,” the band quickly established that two decades of touring have not diminished their playing chops one iota. Martsch, Netson and third guitarist Jim Roth’s hypnotic, weaving guitar interplay was absolutely mesmerizing. Backed solidly by recently added bassist Jason Albertini and drummer Steve Gere, the manner in which the trio traded leads, dispersed echoing dissonance and constructed layers of intricate, nuanced guitar sound was stunning. Even more stunning, perhaps, is how crisp each player’s part was throughout the entirety of the show. The nuances of the each guitarists’ playing was on full-display – never drowned out in the proverbial sonic flood being produced.

Overall, the band successfully interspersed memorable numbers throughout the entire set. Classic tracks “Reasons” and “Center of the Universe,” off the band’s monumental 1999 LP ‘Keep It Like a Secret,’ were followed by “Big Dipper” and an extended, engrossing guitar marathon on “Strange.”

The shifting dynamics of the winding “Stop the Show” was succeeded in-suit by the succinct, guitar acrobatics of “In the Morning.” This was followed by the only song the band played from ‘There Is No Enemy:’ the pulsating, punk-bent stomper “Pat.” To close out the pre-encore set, the band, unexpectedly, trotted out “Conventional Wisdom,” off 2006’s ‘You In Reverse.’

As a band notorious for performing a remarkably eclectic mix of cover songs live (everything from Neil Young to Macy Gray has been given due), it was only rightful the sold-out Grog Shop crowd was treated to a trio of expertly performed tributes to Built to Spill’s forebears. They opened with Blue Oyster Cult’s “(Don’t Fear) The Reaper” (and no, they didn’t skimp on the cowbell), followed by a take on The Clash’s “Train in Vain (Stand by Me).”

To close the night, the typically reserved Martsch engaged in one of his few interactions with the crowd. “Are you coming to see Johnny tomorrow?” he asked fans, referencing Smiths guitar idol Johnny Marr, who was scheduled to take the same stage Wednesday night. “If you see Johnny, please tell him we did a good job,” Martsch added before ripping into the reverb lead of the anthemic Smiths classic “How Soon is Now?” to conclude the show.

Built to Spill’s reputation as a certifiably first-rate live act was fully validated by their set at the Grog Shop. The seemingly effortless virtuosity with which each member performs was absolutely jaw-dropping. 20 years on, Built to Spill continue to remind fans why they are one of the distinguished few at the pinnacle of indie rock-dom. 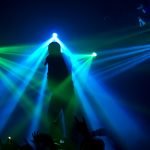