It happened! Surprising absolutely nobody, the Cleveland Browns managed to win a grand total of ZERO of their 16 contests in 2017. What better way to mock ownership and front office bafoonery than to throw a parade! Organized by Chris McNeil, the parade fittingly followed a ‘0’ shape route around First Energy Stadium (or, as fan signage called it, ‘The Factory of Sadness’ and ‘The Pit of Misery’). Unfortunately, CleveRock’s professional photographers were not in attendance due to other obligations, but please enjoy these amateur cell phone photos. 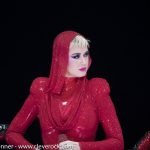