The Brad Paisley 2019 Tour began at Blossom with Brad donning a Brown’s t-shirt to a packed crowd.  He also packed the set with 25+ songs like “She’s Everything,” and “Crushin’ It”. He said he just wanted to make sure that fans “got our money’s worth”. Perhaps a nod to his last show at Blossom which was cut short due to weather concerns.

Paisley always outperforms and over-delivers with an evening of full-on entertainment. The combination of great music, American patriotism, songs of love and heartache, and just plain fun was the perfect recipe to a great Friday night concert. The stage was lit with a giant LED screen that depicted a variety of videos that kept your sensory nerves running at full capacity.

Paisley is always making a point to showcase his love of country and our military. He performed “This Country Music,” to five members of the military and he shook their hands and offered them a place on stage to have a beer and enjoy the concert. If you weren’t already on your feet, you were then, to offer a standing ovation of thanks for their service.

As if fans weren’t rallied up enough from the music, Paisley shared that he has been a longtime Browns fan really got everyone going. He shared that he had attended the Cleveland Browns training camp earlier in the day before the Blossom show and got the crowd roaring when he mentioned, “The Steelers are scared.”

Openers Riley Green and Chris Lane joined Paisley on stage to sing “I’m Still a Guy”, and they even borrowed a fan’s phone to take a few selfies. They asked the fan about a picture of her son and proceeded to give her a signed guitar to give to her son. This was their way of passing the musical torch onto the next generation.

Paisley closed with “Alcohol” which is a fan favorite sing-a-long of “you had some of the best times you’ll never remember with me.” The fans won’t forget this evening anytime soon.

As always, the night kicked off with some great up and comers, one of which was Riley Green. Green opened the evening with casual ease as he sang his thoughts out-loud to a crowd that can relate to what it’s like to be raised country. He sang, “Get That Man a Beer,” a song about a guy who stole his girl and then she left him too. His song “I Wish Grandpas Never Died” touched everyone in the crowd with its soulful acoustic sounds. Throughout his it was he was able to connect to everyone there in some way or another. He’s got something and it’s something special.

Chris Lane had crowds dancing and singing a well, with his hits “Take Back Home Girl,” and “I Don’t Know About You.”  He enjoys putting in a little bit of pop in his country tunes and the crowd didn’t seem to mind at all. He still had his country roots in all his but added some fun upbeat pop sounds to keep the audience on their toes and wanting more.

Paisley has a way of finding up-and-coming talent to open his concert tours.  He has an exceptional eye and ear for new artists that have “got the stuff” to please a country fan and will set the mood for a fantastic evening. 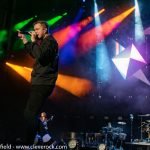