Think of a Blue Man Group show as rock concert, meets perfected New York City street performance, meets Broadway show, meets Stomp. Three performers on stage, none of whom speak, sing, or even grunt, are dressed in all black and painted completely blue (including their faces and bald cap covered heads), combine elements of all mentioned performance mediums into one mesmerizing spectacle.

The actors make unique sounding percussion instruments out of PVC pipes, barrels, and other objects that require out of the box thinking. Typical over-the-top concert lighting coupled with booming sound made the men in blue’s ability to connect with the audience and make the venue feel smaller than its 2,800 capacity all the more important.

After an entertaining (albeit cheesy) pre-show, which featured silliness of scrolling text across a marquee ticker, the lights dropped and the Blue Men began banging on enormous sized drums while several colors of paint were splattered, a fitting entrance to a color-filled; percussion dominate show.

Two late comers were humiliated for their tardy arrival by illuminating them with a spotlight and broadcasting their image on a giant screen. (Author’s note: No sympathy is to be had for these rude violators of theater etiquette!)

The unique interactions the performers have with the audience is different than one will see at any other show. In addition to their frequent inquisitive (borderline creepy) stares that can make any audience member feel singled out, the men in blue do not hesitate to crawl out into the audience to get up close and personal. At one point, a lady’s purse was “stolen” and handed to a child. Another audience member was challenged to land marshmallows in the mouth of a Blue Man.

Performers even go as far to bring unsuspecting theater patrons on to the stage to join in the fun. One participant, a female with Netflix Red hair was seated at a dinner table, where the main course was cellophane wrapped Twinkies (which proved too difficult to unwrap).

A male audience member was pulled in front of a canvas. The Blue Men used his body to assist with creating a multi-colored piece of art, which the man was given as a souvenir afterwards.

No “concert” would be complete without some doofus screaming “Freebird,” but in atypical fashion, the three star performers joined their 4-piece backing band in obliging with an abridged version of the Lynyryd Skynyrd song, before it was abruptly halted after one Blue Man put a lighter in the air and another doused the flame with a fire extinguisher.

Just prior to leaving the stage, giant balls that glowed yellow and blue and measured 7′ in diameter were tossed to the audience and batted around among the crowd. Fans were engaged and their excitement was taken to the next level when paper streamers were launched all over the Connor Palace. (Stinks to be the cleanup crew!)

In typical rock star form, the trio returned for an encore and ended just the way they started: with drums and paint, only this time, with a little more pizzazz.

The only way one leaves this show disappointed is if this is a repeat visit to a Blue Man Group show and the expectation was a performance filled with new acts and never-seen-before shenanigans. But for those taking their maiden Blue Man Group voyage or returning to relive the fun, buckle up and be prepared to be blown away. (And, if you’re in the first few rows, be sure to wear the provided poncho!) 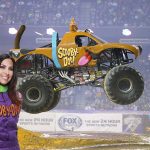 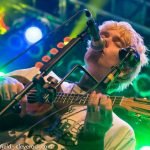 Theater review: ‘Come From Away’