When London natives Bastille played in Cleveland this past May, the group’s intense and energetic performance definitely left an impression on the nearly sold-out crowd at the Masonic Auditorium. Naturally, when the band announced they would be playing Cleveland’s neighboring city, Akron, fans rushed to secure seats.

Though EJ Thomas is an entirely reserved seating venue (which, it wouldn’t hurt them to spring for center aisles), that did stop the crowd from instantly jumping to their feet as the band broke into the opening rifts of “Things We Lost in the Fire,” the sixth single off of the band’s 2013 album ‘Bad Blood.’ Bright flashes of light surged in sync with each kick of the bass drum, illuminating lead singer Dan Smith as he jumped and danced around on stage. Without hesitation, the band instantly kicked into “Weight of Living, Pt. II” followed by “Laura Palmer,” which kept the energy pulsing through the crowd.

Having seen Bastille play earlier this year, it was clear what elements of the show the band chose to change. Most notably, a large screen hung above the group, shaped in the band’s simple signature triangle. The screen flashed random music video clips for certain songs and shots of band members at others. Additionally, the band sprinkled a select few new songs to the setlist, including “No Angels” originally by TLC that Bastille covered on  ‘Other People’s Heartache’ that has since been taken down from all legal parts of the Internet. The band was also able to add “Skulls” to their set, a deeply haunting song from their 2013 album ‘All This Bad Blood.’ Though the rest of the songs in the set were the same as the ones back in May, the talent of the group and their fun, energetic stage presence made up for the similarities.

The group of musicians that make up Bastille combines strong musical talents to create unique and captivating music. Seeing them perform together live simply confirms that. From Dan Smith’s insanely wide vocal range to drummer Chris Wood’s talents on the drum kit and synth (especially during “Overjoyed” ), each member of the group made strong contributions to the creative electronic, indie-pop sound of Bastille.

Throughout the night, Smith had his fair share of fun remarks and “thank yous,” but for the most part, he spoke through his songs. Dan sang each lyric with a passion that only courses through the veins of a true musician. Each song told its own story, and though it’s most likely that not all of them are true, it was easy for audience members to connect with the heartfelt lyrics.

As usual, the band closed the night with one final burst of energy and played their most energetic songs, “Of The Night” and their breakthrough single, “Pompeii.” The flashing lights and pulsing backbeat combined with a surge of crowd energy made it the perfect ending to an exciting show, leaving fans crossing their fingers that the band will make another grand return to the area soon.

Folk-rock group Grizfolk also added to the energy of the night with their opening set. The group had a rather unique sound that combined electronic beats with some rock bass riffs and drumbeats and folky guitar tracks. Some songs had stronger hints of country music than others, adding elements to some of their songs that definitely stuck with fans. While a handful of fans clapped and sang along, others raised a brow in confusion at the band’s mixing of genres. Though their sound varied greatly from Bastille, they still had a fair part of the crowd on their feet by the end of the set and definitely got people excited for their headliner. 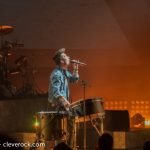