It has been said there is healing power in music. And, damn, did Clevelanders need healing on Sunday night after that ol’ fashion ass whoopin’ their beloved Cleveland Browns took earlier in the day. (There’s always next year, right?)

If the statement about music having healing power is true, there are no greater medicine men than brothers Scott and Seth Avett, who, along with cellist Joe Kwon and bassist Bob Crawford collectively make up The Avett Brothers. Two hired hands, one on drums, the other on keys, rattled off a 26-song set, clocking in at a little over two hours.

Of the 10+ times this reviewer has attended Avett Brothers shows, this memorable night at the Wolstein Center is crowned the best. Maybe it is the fact that the setlist was mind-blowing for any loyal Avett fan as it included deep-cuts, unreleased tunes, and songs that should have been hits if the gatekeepers of the music industry had only allowed them to be so. Perhaps the men still continue to perfect their craft and still find room to get better year after year, despite being so close to the ceiling.

The Concord, North Carolina natives strolled on to a dark stage (making it difficult to see them saluting the roar of the audience) mere minutes after the advertised start time of 7:45. With no opener to speak of (that’s a good thing), the band jumped right into the show with a bang with fan-favorite “Head Full of Doubt/Road Full of Promise” from the band’s 2009 major-label debut (‘I and Love and You’) which saw Scott behind a piano and Seth on guitar. The Lyrics “When nothing is owed or deserved or expected /
And your life doesn’t change by the man that’s elected / If you’re loved by someone, you’re never rejected / Decide what to be and go be it” had the audience singing atop their lungs with the band.

A new song, the upbeat “High Steppin’,” which will appear on band’s upcoming studio album, ‘Closer Than Together’ (due out October 4) was followed by one of this reviewer’s personal favorites, “February Seven.”

Not shying away from new tunes early, Seth took a seat behind the piano to perform “Bang Bang” (also on the tracklist for the upcoming album). In a letter penned to the Avett’s faithful following earlier this summer, Seth stated “The Avett Brothers will probably never make a sociopolitical record. But if we did, it might sound something like this.” And, if the band ever made a sociopolitical song, it would sound a lot like “Bang Bang.” The lyrics to the second verse are “I live in the country because I love peace and quiet / But all of my neighbors have closets full of machine guns / And every Sunday they’re out there, pretending to be Rambo / And I’m in here pretending like Sunday is still sacred.” The bridge which follows goes, “Conceal and carry your fear/ Don’t need no weapons here / I’ve had all I can stand /Of the bloodthirsty leading man.

The mood lightened up with “Shame” and “Die Die Die” following immediately behind. Up next, the first of a handful of rarities/deep-cuts on the evening, “Matrimony” from 2006’s ‘Four Thieves Gone’ had newer fans scratching their heads and old school followers reveling.

Fast forward a few tunes to “Distraction #74,” a funny tune about a two-timing man who loses both of his lovers, during which, Scott, Seth, Kwon, and Crawford alternate singing words, join in harmony, go back to alternating words, before settling on a song-ending harmony. (One of those “you had to be there” moments!)

Next, “Weight of Lies,” a song that hasn’t surfaced often on recent tours (and certainly not a staple at North East Ohio shows) appeared on the setlist. (Again, another personal favorite of this reviewer!)

Avett Brothers continued with “Ain’t No Man,” a single from their latest studio album, ‘True Sadness.’ “Murder in the city,” who’s ending lyrics “Always remember there is nothing worth sharing like the love that lets us share our name” were printed on this writer’s wedding program, was followed by another deep cut, “Pretty Girl at the Airport,” during which both brothers and Crawford gather around one mic.

“Salina,” had the crowd roaring near the song’s beginning when the lyrics “Cleveland, I ain’t never felt nothing so strong / been believin’ the words to my songs, Ohio.”

Scott then mentioned that Ohio holds a special place in the band’s heart, calling it one of his “best discoveries” in his 20s. He also referenced the band’s first show in Cleveland at the Beachland Ballroom. “You all weren’t there,” he quipped, “but it’s better with you now.”

“I and Love and You,” another Avett tune that had potential to be a hit that never quite made it, had the audience singing along beautifully to the chorus.

Fast forward once again to “Kick Drum Heart,” a longtime live staple of the band, had fans clapping along to the kick drum and featured an energetic electric guitar solo from Seth.

“Satan Pulls the Strings,” (which wasn’t quite the same without former touring member Tania Elizabeth) and “Morning Song,” closed out the set before the band returned for an encore that spanned four songs.

“In the Curve,” an ode to reckless driving preceded “Late in Life,” followed by a Bob Willis cover before closing with “No Hard Feelings,” from ‘True Sadness,’ a lyrical masterpiece with lines such as “When I lay down my fears / My hopes and my doubts / The rings on my fingers / And the keys to my house / With no hard feelings” and “Will I join with the ocean blue / Or run into the savior true / And shake hands laughing / And walk through the night / Straight to the light / Holding the love I’ve known in my life / And no hard feelings.” A perfect ending to a near-perfect evening.

With such an extensive catalog from nine studio album (and a tenth on the way), everyone has a favorite (or five) omitted from the setlist, but based on fan reaction, nobody cared.

This night surely left the thousands in attendance eagerly awaiting ‘Closer Than Together’ to drop next month and thirsty for the band to return to town. 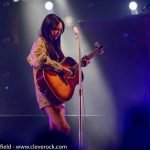