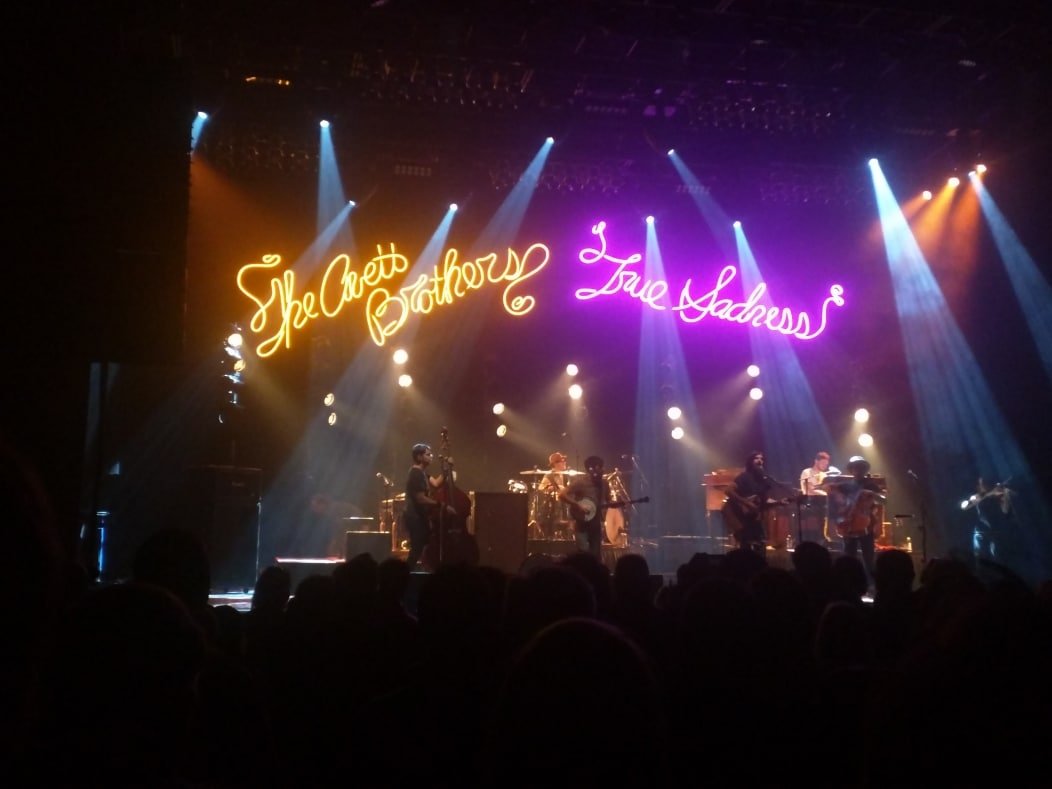 Brothers Scott & Seth Avett, alongside their incomparable musician companions, made their way to the beautiful Akron Civic Theatre for the first evening of a two-night engagement on November 15 during their ‘True Sadness’ tour.

With no opening act to speak of, the biological brothers, along with musical brothers Joe Kwon (cello), Bob Crawford (double bass), and Mike Marsh on the drums, were joined onstage by touring members Tania Elizabeth (violin) and Paul Defiglia (keyboard). (It is worth mentioning that the assigned instrument notations above varied sightly throughout the evening, showcasing the members’ versatility.)

Met with rousing applause and a standing ovation at 7:45 PM, the gang kicked off their 28-song, two hours plus set with “Head Full of Doubt / Road Full of Promise” from their 2009 major label debut, ‘I and Love and You.’

No sooner had the audience taken their seats when Scott sang the lyrics “When nothing is owed, or deserved or expected / And your life doesn’t change by the man that’s elected” — brought the audience back to their feet with agreeable cheers.

It was not until the fifth song in the set that the band showcased any tunes from their 2016 release, ‘True Sadness,’ when they played the title-track. The band’s simple backdrop that read “The Avett Brothers” on the left and “True Sadness” on the right, illuminated, bringing a little more light to the stage (which was unusually dark throughout the show).

Filled with electronic beats and way-too-overdone synths, ‘True Sadness’ is the first album from The Avett Brothers that didn’t make this writer’s list of favorites. Live, however, songs like “Satan Pulls the Strings” and “Victims of Life” saw the band get back to their fun-filled, rock-infused folk roots. It is nothing short of true, true sadness (pardon the pun) that versions of the new tunes on display tonight were so distant from the ones on the record.

Early on in the set, Scott Avett stood alone onstage as a spotlight spotlight shone down on him while he strummed his guitar and played “Murder in the City” from their 2008 album ‘The Second Gleam.’ Some audience members never learned that solo acoustic numbers are a good time to shut the hell up and listen intently, or at least not disturb others trying to do so. (Oh, and using flash on your camera / phone from afar does not help!)

Towards the middle of the show, a definite treat was delivered as the band performed“Life,” the closing track from their album ‘The Carpenter.’ A true lyrical masterpiece. [Give it a listen, below]

Needing more than one hand to count the number of times I have seen this band, this show, in particular, showcased Scott more than Seth; different from the generally equal balance of the brothers. If there is a sibling rivalry to be had between the boys, Seth may have been a little jealous of the affection Scott received from the crowd tonight. But, at least from their stage personas, don’t expect Seth (who is basically the Dave Grohl of modern folk), to cry out “it’s not fair!”

The Avett Brothers delivered four non-originals on the night, including the comical “Crazy For You” (Benj Hughes cover) and prior to that,  “Hallelujah,” honoring the late Leonard Cohen, who went home to compose songs for heaven’s house band on November 7.

Shortly before the encore break, Scott and Seth ran down the aisles (while continuing to make music) during “Kick Drum Heart,” handing out high fives and hugs to audience members that impeded their routes. The rest of the gang played their hearts out and danced all over the stage. If judging solely on fan reaction, this was one of thehighlights on the evening.

Surprising nobody, after leaving the stage following “Incomplete and Insecure,” The Avetts returned for an encore. Beginning with “Distraction #74,” a fun tune where, at times, members alternate singing a single word before closing a stanza in a united harmony, was followed by the traditional song, “Little Sadie.”

The band closed with the mellow “Morning Song” (yet another lyrical masterpiece). This critic could not help but feel mild to moderately disappointed that some of his favorite numbers were omitted from the setlist tonight. Where is “Live and Die” ? How about an oldie like “Swept Away” ? “Talk of Indolence,” guys? In all fairness, having such an extensive catalog, even a two-night stand poses challenges when putting together the setlists. Welp, there’s always tomorrow night! And I, for one, can’t wait for more.