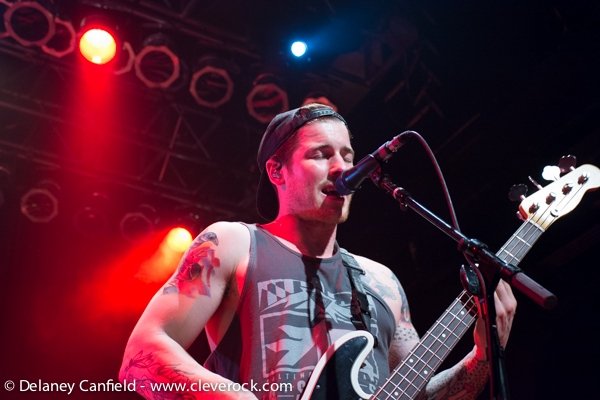 Fans lined up yesterday evening (04.25.14) in eager anticipation for All Time Low’s concert at House of Blues Cleveland. Some arrived as early as 11:00am for the 8:00pm show, braving wind and rain, all in hopes of securing a coveted spot close to the barricade. Once the show got rolling, the general consensus among fans was that their hours of waiting was well worth it.

The band kicked off their set with “Do You Want Me (Dead)?” from their 2011 release, ‘Dirty Work.’ With the crowd already revved up, the quartet jumped to “So Long Soldier,” a song the band weaved into the setlist for the first time on their current trek.

The recipient of the prestigious Alternative Press “Band of the Year” award in 2008, All Time Low did a solid job of mixing in songs that spanned their entire discography, pleasing old and new fans alike.

Frontman Alex Gaskarth and his right hand man, guitarist Jack Barakat brought a sense of intimacy to the sold out venue. In between songs, they told humorous stories and made inappropriate jokes as bass player Zack Merrick and drummer Rian Dawson grinned and laughed along with the audience.

Crowd favorites of the night included “Vegas” and “Poppin’ Champagne” from the group’s 2007 album, ‘So Wrong, It’s Right,’ as well as “Time-Bomb” from ‘Dirty Work,’ the latter of which saw a handful of lucky fans receiving an onstage invite to become part of the show.

ATL ended with their typical set closer, “Dear Maria, Count Me In,” the band’s first track to chart on the Billboard charts.

All Time Low brought a high-energy show that left fans with smiles on their faces, and reminded concert goers of how great it feels to be young and alive.
[divider]

Check out CleveRock’s photos of All Time Low in Cleveland! 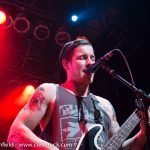 Caught on Camera: All Time Low