The last time I caught a Honda Civic Tour, the year was 2002 and Incubus was headlining. This was probably the first and last time I completely and shamelessly immersed myself in total fan girl behavior, because, thank the Lord, my pathetic attempt to get noticed

by Brandon Boyd was a success! Pre-show, I spent hours making incredibly obnoxious, neon orange, puffy painted t-shirts and somehow managed to score meet and greet tickets thanks to the legendary WMMS. The shirts had giant black buzzards on them who were singing Incubus songs via cartoon speech bubbles. They were probably the ugliest things I’ve ever created, so naturally, they would be what I was wearing when I met my soulmate, Brandon Boyd. I was nervous, and when I get nervous I fidget, and the only thing I had with me to fidget with was the Spiderman web blaster I got out of my Corn Pops. Apparently Mr.Boyd’s eyes caught said web blaster, because he approached me, took it, wore it, squirted DJ Killmore with it… commented on my immense puffy paint abilities, made fun of the scary girls that had t-shirts with his face airbrushed on them and indulged me in other random, friendly banter that I recorded word for word in my diary the moment I got home. Love in the time of web blasters. Ah, nostalgia. Needless to say, in my little brain it was an epic evening.

The Honda Civic Tour 2008 rolled into Cleveland Friday (5.16.08) in the midst of Cavs playoffs mayhem. Headlined by Panic! At the Disco and featuring The Hush Sound, Motion City Soundtrack and Phantom Planet, the Time Warner Cable Amphitheater and the surrounding areas were buzzing with all kinds of activity. Pairing up with two nonprofit organizations for this year’s installment, the Honda Civic Tour gave concert goers an informational, interactive kind of concert going experience. After sitting in Cleveland traffic in my SUV, I felt slightly sheepish, but was relieved to learn that a portion of ticket sales was being donated to Reverb, a nonprofit that specializes in making tours “greener” and educating the public on all things green. Some proceeds also went to Global Inheritance, a nonprofit organization that focuses on creative ways to engage the public and stimulate eco-friendly change. Inside the venue, recycle bins were everywhere, and three gigantic screens flanked the stage, playing Honda commercials, music videos, clips of the featured bands engaging in antics and delivering messages on how to save the environment, as well as a message from Panic At the Disco lead singer Brendon Urie promoting the Eco-Challenge Contest presented by Spin Magazine. Winners of the contest get a Honda Civic Hybrid and the opportunity to decide how a portion of the concert proceeds will be spent to better the environment.

Nixing the vaudevillian circus show cabaret thing and opting for some simpler props to establish ambiance, like mic stands wrapped in leafy greens, giant blossoming flowers, and strings of those big, fat, retro looking Christmas lights for example, Panic! At the Disco took the stage right on time. Promoting their sophomore effort, ‘Pretty. Odd.’ PATD kicked the night off with the new single, the ever catchy and constantly on the radio “Nine in the Afternoon.” A solid assortment of songs from the new album were played as thousands of bubbles drifted down from the ceiling, including “That Green Gentlemen,” “She’s a Handsome Woman,” and “Behind the Sea,” a tune which features guitarist Ryan Ross taking over lead vocals. Of course, the old favorites from 2005’s ‘A Fever You Can’t Sweat Out’ took their spots in the setlist including “Better if You Do,” “Lying is the Most Fun A Girl Can Have Without Taking Her Clothes Off,” which Ross dedicated to all the singles in the audience, and “I Write Sins Not Tragedies,” which gets stuck in my head for hours every time I hear it. “Northern Downpour,” another new tune, slowed things down with an old-fashioned audience singalong, as song lyrics flashed up on the big screens and cell phones and lighters were raised into the air. As their set drew to a close, cheering and insanity from the Q floated down to the amphitheater, and PATD thanked Cleveland for being awesome, gave LeBron some props, and even took a moment to offer up a spirited “Go Cavs!” before they disappeared into the darkness.

Earlier in the evening, Phantom Planet (who also played 2002’s Honda Civic Tour) delivered a short, seven song set of their sunny SoCal rock n’ roll. “Do the Panic” and “Dropped,” both from the recently released ‘Raise the Dead,’ were featured with some tambourine and backing vocal support given from several members of The Hush Sound. Of course, several songs from ‘The Guest’ made appearances, including “Always on My Mind” and the crowd-favorite (and ‘O.C.’ theme song) “California,” during which lead singer Alex Greenwald did his best to get the audience to come alive, and in the process of doing so successfully earned the distinction of being the only guy brave enough to leap from the stage and lend his body to the audience on the evening.

The Hush Sound took the stage next, with their brand of quirky piano driven pop-rock driven by the sweet and melodic vocals of Greta Salpeter and Bob Morris. During their groovy mellow set, balloons bounced about freely in the audience, and in the spirit of people from other bands joining bands on stage that are not their own, Brendon Urie stepped in to lend his vocals to The Hush Sound during “Don’t Wake Me Up” from 2006’s ‘Like Vines.’ The set closed with their set with a new song, “Honey” from their third album ‘Goodbye Blues,’ released in March 2008.

Motion City Soundtrack had, by far, the most chaotic set of the night. By the time they took the stage the sun had set and the fans were growing restless. Playing a set nearly twice as long as the two bands previous, MCS kicked out an upbeat twelve song set showcasing the best their witty indie rock repertoire has to offer with a heavy dose of songs from 2006’s ‘Commit This to Memory’ including “Everything is Alright,” “Time Turned Fragile,” “Attractive Today,” and “L.G. Faud.” During “Broken Heart,” a newer track from 2007’s ‘Even if it Kills Me,’ frontman Justin Pierre had to stop playing, apply his spectacles to his eyeballs so he could see what was going on, and stop the audience from trampling some fallen members. After some banter about Arsenio Hall, and how a majority of the audience members were probably born after Arsenio Hall’s rise to greatness/fall into obscurity, MCS closed their eccentrically wonderful set with and oldie off of 2005’s ‘I am the Movie’ titled “The Future Freaks Me Out.” 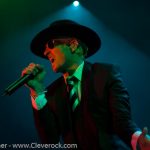